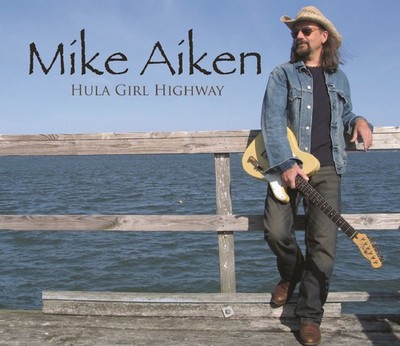 Not many people get to live life on their terms. But that is exactly what singer/songwriter/sailor Mike Aiken has been able to do by combining his three greatest passions in life: music, sailing and adventure. With the release of Hula Girl Highway, Mike's sophomore record for Northwind/Aspirion Records, he continued to cement his place as an authentic voice of a wayfaring lifestyle that most of us will only just dream about. Mike is truly one of the lucky ones, living the life he sings about with his wife and musical partner, Amy, aboard a 42-foot cutter in the Norfolk, Virginia area. He's as adept at tying nautical knots as he is painting musical memories and images of the places and people he's met along his journey. Strangely enough for a die-hard sailor, that journey began as very landlocked. Mike grew up outside of Buffalo in rural Western New York; his love affair with the sea was kindled at the young age of eight when a family friend introduced him to sailing. Around the same time, Mike started developing his natural musical ability, learning to play acoustic and electric guitar. His musical metaphors are a mix of those two worlds: rural and coastal. 'I come from those back roads, dirt under my boots; now I live on the water with a country point of view,' Mike sings in his first single off the new record, 'Find Me.' "I wrote this like I write all my songs," says Aiken, "from the heart and from what I know. This one came to me while anchored in the Bahamas, holed up during a hellacious storm. Amy and I weathered it for three weeks, taking odd jobs to survive. We had wind generators to make drinking water and were better off than most. It was then I knew I was one of the luckiest SOB's in the world to have the chance to live this lifestyle." While luck may have something to do with it, so does hard work. It all started to pay off when Mike began touring all over the country and in Europe. Highlights included opening shows like the Sunset Festival in Newport, Rhode Island for Bruce Hornsby and appearing at the Hampton Coliseum Winter Blast with Ashton Shepard and Chris Cagle. Mike was also invited to participate at the prestigious Frank Brown International Songwriters Festival in Gulf Shores, Alabama. Mike's success on the other side of the pond proves that music knows no boundaries and borders. He toured Europe, including France, and hit 24 on the Euro/Americana Charts, with the single 'No Fishin' Pole' reaching the top spot on the Euro Indie Hot Disc Chart. The song is part of a Universal Records Country Compilation CD along with tunes from Tim McGraw, Joe Nichols, Gary Allen, Phil Vassar, and Trisha Yearwood. Mike's previous recordings were made at sea almost literally, aboard a converted 1941 Navy Tugboat. However, when it came time to track songs for this latest record, a change in latitude but not attitude was in order. "I didn't want to reinvent the wheel and compromise who I am musically, I just wanted to ramp it up a bit. To do that I recorded the project in Nashville with the best players possible. " The result is a twelve track record filled with Mike's signature breezy feel good sound along with his strong song sensibility and musical muscle (Mike plays most of the stringed instruments). Eight of the songs are original compositions, and the rest are covers that he selected with great deliberation. "When writing and picking the music I think of the folks and fans who have supported me along the way. I chose the covers, 'Blowin' Like A Bandit' by Guy Clark, 'Banana Republic' by Steve Goodman, and 'This Here Mandolin' by Michael Smith to reflect who I am and who my listeners are." Like the ever-changing sea that he loves, there are many sides to Mike. Besides recording and touring, he's also a contributing writer for Singer and Musician Magazine and a music producer for Raceline TV (syndicated NASCAR series). Mike's six-string dexterity earned him a Takamine Endorsement and the creation of his signature guitar, the 'Travelin Bone.'' A believer in giving back, his philanthropic activities include being a sponsor of the Great Chesapeake Bay Schooner Race (benefiting the area's environmental interests) and a founder of the "Aiken and Friends Music Festival," which helps fund music education. Mike continues to tour, work on new songwriting and recording projects, and organize philanthropic activities, most currently the 2011 Aiken and Friends Music Festival in September and October. "I am one of the lucky ones," muses Aiken. "With my music, my boat, and my friends, I am ready for wherever the winds blow." For the rest of us that's a good thing, a chance for us landlubbers to close our eyes and live a life on the high seas vicariously through Mike Aiken and his music. Listeners say: I saw your music on airplay direct and took it for airplay. You are great! - Ginny Foley, Music Director of Neon Productions Radio Greetings from Principality of Liechtenstein ... your songs sounds great! :-) - Anna Berghold Hula Girl Highway made my list of top 10 albums for 2008. - Gianni Zuretti, CD Reviewer for Italian roots music website.

Here's what you say about
Mike Aiken - Hula Girl Highway.