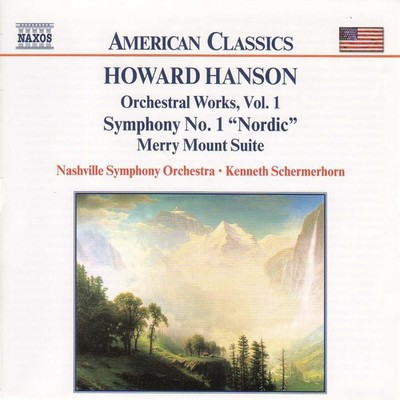 Howard Hanson (1896-1981): Orchestral Works, Vol. 1 Completed in 1933, Merry Mount was to be Hanson's only opera. With a libretto by R. L. Stokes after the novel by Nathanial Hawthorne, the premiere, under Tullio Serafin, took place at the Metropolitan Opera, New York on February 10th, 1934 (a recording taken from the New York run is available on Naxos Historical 8.110024/5). The scenario, concerning witchcraft and sexual obsession in seventeenth century New England, offered unlimited scope to the composer's full-bodied orchestration and lush harmonic manner. Despite initial success, however, the opera was not revived until 1964 and seldom thereafter. Hanson compiled the present five-movement suite in 1938 and recorded it in 1940. The Overture begins with a brass chorale, which sounds forebodingly over tolling timpani and gongs, gaining in passion as the music emerges into focus. A heightened turn to the major, replete with pealing bells, indicates the powerfully emotive nature of the story about to unfold.Children's Dance is a witty and rhythmically agile scherzo, bounding forward with uninhibited zest. Ironically, it depicts the presence in the town of pleasure-seeking cavaliers. Love Duet is warm and lilting, the melodic material intensifying by degree, before it reaches a purposeful climax over a measured timpani tread, and closes in a suddenly ominous mood, reflecting the doomed desire of Pastor Bradford for Lady Marigold Sandys. The Prelude to Act II opens pastorally, becoming rhythmically animated as the music moves forward impulsively into the Maypole Dances. This vividly descriptive sequence, complete with modal inflections and offbeat percussion touches, heads relentlessly to it's whirlwind conclusion; a graphic image for the conflict between hedonism and Puritanism which underlies the opera's fateful conclusion. Written during 1925-6, Pan and the Priest is an intriguing symphonic poem, which introduces a new rhythmic clarity to Hanson's compositional armory. The opening idea sounds out mournfully, and appropriately, on cor anglais, soon joined by clarinet and oboe, before strings add an atmospheric backdrop. The music grows more animated over a steady pulse, reaching a short-lived climax, before solo wind effect a brooding return to the opening. Suddenly a piano, marked obbligato in the score, brings about a new impulsiveness, the music striding forward vigorously. Lower strings introduce a new theme (6:28), which grows quickly in expressive ardor, while not neglecting the more pensive mood heard earlier. The reappearance of the first idea presages the main climax, with both themes passed excitedly around the full orchestra. The work closes in a mood of full-throated eloquence. Rhythmic Variations on Two Ancient Hymns is one of Hanson's least known works, and was thought to be lost until quite recently. The first hymn emerges somberly and spaciously, before a solo violin (1:29) sounds forth it's successor, melancholy and with just a hint of the archaic, over a halting accompaniment. This is combined in canon on full strings, before the texture opens out and the hymns combine to draw this short, evocative piece to it's expressive conclusion.

Here's what you say about
H. Hanson - Orchestral Works 1.