Alex McMurray - How to Be a Cannonball 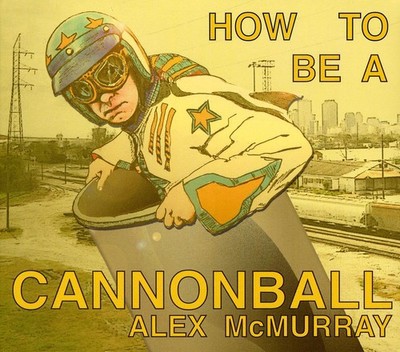 Someone somewhere in the music business could profit by helping Alex McMurray build a career at an economic level closer to the musicians he most closely resembles: Tom Waits, Randy Newman, Elvis Costello. In a town full of great musicians, Alex McMurray is regarded as one of New Orleans' best singers, guitarists and, above all, songwriters. He is also a wit, a bulldog, and, as co-producer (with his wife) of Chaz Fest, a pillar of his community. The ladies say he's kind of cute, but a little scary in his intensity sometimes. Critics love him. He gives good interviews. Alex McMurray is currently a soloist, a member of at least one duo, one trio, one quartet and a large nautical men's chorus (six albums among these configurations), and he is a regular guest guitarist in several other bands. He has toured extensively, building a wide fan base outside New Orleans. He is a regular performer at the New Orleans Jazz and Heritage Festival. He connects with live audiences -- hipsters or tourists; it's what he does for a living. But it is his songs that set him apart. Most of them are stories, filled with dark humor, bawdiness, deep pathos and serious fun. Like all good songs, they're best encountered through your ears, but some of Alex McMurray's songs read very nicely, too. Some of Alex McMurray's characters aren't very nice, like the guy who wants his baby to have a baby so they can sell - oops, spoiler alert, or almost. Many of his songs take outrageous turns. There's anger, shock and awe, like the Iraq vet's reaction to post-Katrina New Orleans: "Take me back to the war." But there's also the moving, ultra-romantic song about those lost-forever days when the singer and his partner in crime were scuffling in New Orleans, in love like nobody else ever. Musicians in New Orleans don't necessarily make a lot of money, but they get to play a lot, if they're good. Alex McMurray plays all the time -- around the world, on a regular circuit in the United States and in all the venues large and small in New Orleans. Someone with a bigger budget for recording and promotion could find him a profitable investment.

Here's what you say about
Alex McMurray - How to Be a Cannonball.