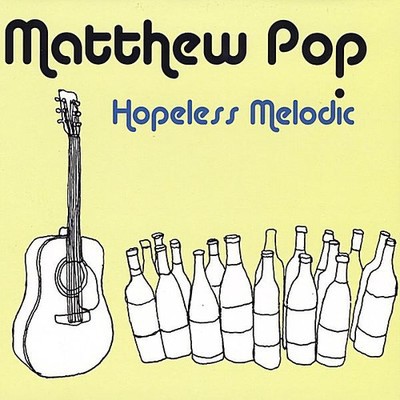 From live-for-the-moment anthems of reckless youth to angst-filled tales of doomed late-night love, Matthew\'s songs have always had more twists and turns than a John Grisham spy novel. One moment, he\'s showing the sensitive inner man, backing his intimate lyrics with delicate acoustic guitar textures and then he Jeckyll and Hydes you with some close-the-shutters and lock-up-your-daughters rock and roll. Wherever his inspiration comes from, Matthew Pop emerged as an old-school tunesmith, someone who approached the craft of song writing with one simple edict: If you can\'t walk away singing the tune after just one listen, it ain\'t worth the digital medium it was recorded on. Writing, recording, and performing since he was fourteen, Matthew is finally beginning to win the acclaim and attention that his archives of over two-hundred well-crafted songs deserves. Two of them, \'Get It On\' in 2004 and \'Belgium Baby\' in 2005, were finalists in the pop category of the JOHN LENNON SONGWRITING COMPETITION and MTV\'s THE REAL WORLD featured \'Get It On\' in several of their episodes, as well as (2007) \'Buried In The Sun\' being featured in Episode 1.19 of MTV\'s \'WHY CAN\'T I BE YOU?\'. Strongly influenced by a mix of classic and contemporary artists like the Beatles, Elvis Costello, and Radiohead, critics have often compared Matthew to the likes of Thom Yorke, Elliott Smith, Weezer, and the Eels. A dynamic, swaggering, live performer, Matthew, who never lacks for self-confidence, proudly attributes his stage prowess to two basic qualities: I got more hooks in my songs than a bait and tackle shop, and chicks dig me. Matthew Pop has played many prestigious New York area clubs like Southpaw, The Hook, Warsaw, Pianos, and Maxwells, as well as playing solo gigs in the region\'s acoustic venues. Matthew was the opening act for Sire Records\' REGINA SPEKTOR at the Cabaret de la Musee in Montreal on her 2006 tour, and completed a highly regarded performance at this year\'s NXNE festival in Toronto. His attention is now focused on his new album,\'Hopeless Melodic\', on which he wrote, produced, arranged all the material and played all the instruments.

Here's what you say about
Matthew Pop - Hopeless Melodic.