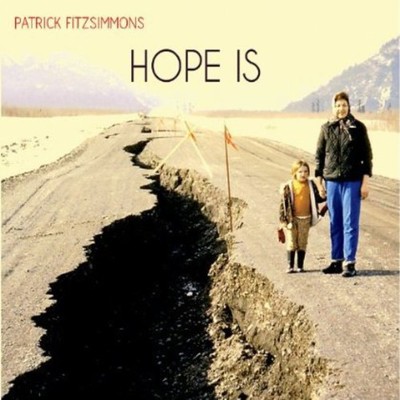 Patrick Fitzsimmons' sixth album is aptly titled Hope Is (Malletts Bay Records). The title is directly inspired by the Emily Dickinson poem, "Hope Is The Thing With Feathers," but the album's' emotional content is grounded in powerful real life events. The upcoming release is the singer-songwriter's definitive statement after a victorious two-and-a-half-year battle with cancer. Fitzsimmons has been called "one of the most captivating songwriters around today" by Relix Magazine. And John Platt on New York City's WFUV Radio said: "Patrick has such a melodic gift ! He is a singer-songwriter of the first rank." Fitzsimmons began writing Hope Is in winter 2011. He was creatively blocked, so he forced himself into a "song a day" regimen. He made an agreement with his long-distance girlfriend that, at the end of each day, he would debut a song to her via Skype. The two called these "Skype Dates." Being that the relationship was bi-coastal-him east in Vermont, her west in Washington State-he had until 3:00 AM each night to come up with a tune. "I got tired of complaining about being blocked, so I just jumped in with a song a day for a week. Regardless if it was a piece of garbage or a masterpiece, it just had to be finished before I called her at 12:00 AM her time," Fitzsimmons details. The buoyant drive of the album marks a compositional breakthrough for Fitzsimmons. "I wanted the songs to be as strong and meaningful as I could make them but this time around I really wanted to make a CD that was, overall, both rhythmically and emotionally upbeat' he reveals. Highlights include the shimmering 'I Found You', an uplifting pop-rock tune, and the propulsive 'Here For You'. The track is a warm and candid snapshot from this period of creative rebuilding. Fitzsimmons sings: 'There is grace in places we don't see . Don't be afraid to say you do not know.' The album's mesmerizing and beautiful finale is the winsome and hypnotic title track. 'Hope Is' is a stunning mantra-like composition referencing the Dickinson poem and reflecting the inner peace achieved after a deep, soulful struggle. Hope Is was produced by Fitzsimmons along with engineer/co-producers Tom Askin and Grammy nominee Dan Myers. Myers and Fitzsimmons were both in the esteemed folk-rock band From Good Homes, signed to RCA in the late 1990s. Myers sits in on keyboards and saxophones. Grammy nominee Brady Rymer, also in From Good Homes, plays bass on most of the album while Paul Kuzik, formerly in Swampadelica and a regular in Fitzsimmons' gigging band, plays bass on the rest. Tom Askin, formerly with The Samples fills in with piano and backing vocals. Eighteen year old wunderkind, Geoff Doubleday Jr, now a regular in the PF gigging band, spices up many of the songs on Hope Is with his tasteful, melodic electric guitar. Loni Bach, who has now recorded on all six of Patrick's CDs, returns on cello. Special guests on Hope Is include John Ginty from Jewel, Santana, Sheryl Crow, and Ryan Adams on Hammond organ,violinist Tim Carbone of Railroad Earth, who is featured on Fitzsimmons' cover of Bob Dylan's Sara, Damian Calcagne of Swampadelica on Hammond organ and guitarist Buck Dilly of The Blue Sparks.

Here's what you say about
Patrick Fitzsimmons - Hope Is.