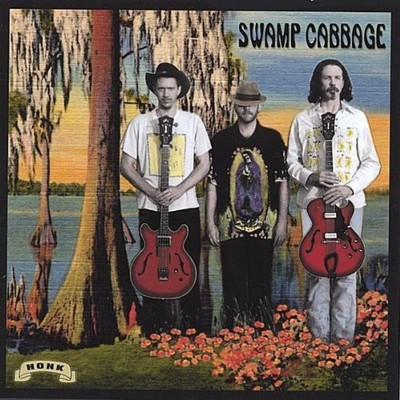 The Seminoles, Timuquans and other Native Floridians harvested, boiled and ate the hearts of the Sabal palm tree. Steamed and served as a stew it's a rustic delicacy similar to artichoke hearts and traditional cabbage. That essence of the "real" Florida is the basis for Swamp Cabbage's inspirational archetype: a mish mash of genres boiled into a stew of mixed blues, jazz, soul, southern rock, Appalachian and even classical vibes. Swamp Cabbage was formed in 2001 by veteran guitarist Walter Parks, who built an international career as the lead guitarist for Woodstock legend Richie Havens. Parks, who recently marked his debut as a solo artist with the release of his self-titled album earlier this year, formed the group along with bassist Jim DeVito and drummer Jagoda as a way to explore his southern musical influences. Swamp Cabbage - using a guitar, bass and drum format -- sounds like a southern rock band but "thinks" like a jazz, blues or classical trio. Harmonically, their sound is more complex than the blues. Rhythmically it's akin to New Orleans jazz. Lyrically, they offer a comedic travelogue through Park's North Florida upbringing, all complimented by his electric guitar style -- a mélange of Scott Joplin's ragtime and Jerry Reed's bayou pickin. DeVito's bass, barks like a tuba through a fuzz box, and is backed by Jagoda's New Orleans funeral parade style drummin'. With four albums of original material under their belt -- Honk (2006), Squeal (ZOHO Roots, 2008) and Live From New York (2010)-this summer the trio released Drum Roll Please, a disc of re-envisioned, re-imagined and re-swamped 70s classics, presented in a way that only the raspy singin' combo of fatback blues and trailer park funk can dish out. Swamp Cabbage is currently on tour in support of Drum Roll Please and their original music can be heard on the Discovery reality show American Guns credits, and on My Big Redneck Wedding, Man Vs. Food, Emeril Green, Extreme Pig Outs, Gene Simmons Family Jewels, Roadtrip Nation (PBS), Samantha Brown Passport, Amazing Wedding Cakes and Chasing Classic Cars.

Here's what you say about
Swamp Cabbage - Honk.