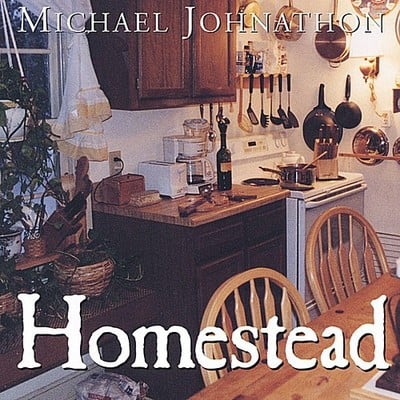 FOLKSINGER/SONGWRITER, AUTHOR AND RADIO HOST MICHAEL JOHNATHON Michael Johnathon is a folksinger/songwriter, a concert performer, storyteller and author with a weekly, international audience of well over 600,000. In it's sixth year of production, Michael's WoodSongs Old-Time Radio Hour, featuring grassroots and independent artists from all over the world, has amassed more than 400 radio station affiliates (including the Voice of America Satellite Music Network) and can now be heard in more than 32 countries. WoodSongs also has the distinction of being the world's first multi-camera, weekly series broadcast live on the internet and has recently been finding it's way onto cable TV networks across the US. A native of upstate New York, Johnathon began his career in the industry by moving to Laredo, Texas, to work as a disc jockey. He relates the story of how he was spinning records at 3:00 a.m. when he played the song 'Turn, Turn, Turn' by The Byrds. Pete Seeger, who wrote the lyrics to the tune, was from Michael's hometown, and by the end of the song, Johnathon says he had experienced 'a religious conversion of sorts, only musical' and was determined to be a folk singer. Two months later, he packed his bags and headed for the 'hills and hollers' of Eastern Kentucky, settling in the small hamlet of Mousie. Johnathon began playing the banjo, knocking on doors to learn the folk songs and bluegrass rifts of the region, participating in numerous front porch jam sessions and absorbing the unique culture of Appalachia. Michael believes that folk is a tradition learned only through the people who play it and have passed it down over the generations. 'There is no sense in going forward unless you know where you've been,' says Johnathon. 'The biggest job of a folksinger is bringing songs from the past along with you within the body of your work and presenting them as if they are your songs.' Michael Johnathon does just that and his experiences with the 'real' music makers of Eastern Kentucky infuse his art with a sense of genuineness and truth. Folk is a way of life to him and his music inspires listeners to embrace him as an artist and is an anthem for a simpler, richer way of experiencing the world. Although Michael says there was no 'Folk 101' that prepared him for the success he has achieved, after enjoying one of his concerts you feel as if you just had a crash course in the age-old musical tradition and loved every minute of it. Michael is touring to support his seventh CD release, Homestead, a carefully crafted collection of original songs written and performed by Michael about his perception of 'home'...his vision, his yearning, and his loss. Homestead also features bluegrass musicians and friends Sam Bush, John Cowan, Rob Ickes, Ronnie McCoury, Barbara Lamb, Michael Cleveland, Don Rigsby, J.P. Pennington, J.D. Crowe and others. In addition, Michael is currently writing a sequel to his critically-acclaimed WoodSongs book to accompany his Homestead CD. Also in the works is Michael's first live album recorded with The Folkboy Orchestra from the WoodSongs Old-Time Radio Hour featuring Captain Don Cornwell on bass, Hotlicks Harsha Sen on mandolin and 17-year old Ben 'The Kid' Sollee on cello. The publication date of WoodSongs II: A Folksinger's Social Commentary, Homestead Manual and Song Book and the release date of the Michael Johnathon and the Folkboy Orchestra Live! CD is Fall 2003.

Here's what you say about
Michael Johnathon - Poetman.