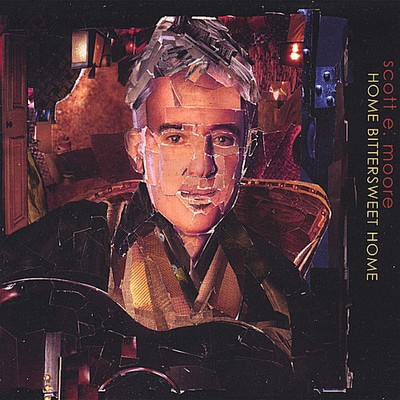 Scott E. Moore is a respected indie singer-songwriter and guitarist, known for his unique blend of soul, modern folk, jazzy-blues and Americana. He has been featured on public radio and toured throughout the US, earning a reputation as a 'musician's musician" and a 'songwriter's songwriter.' He has performed venues large and small, alongside a wide variety of genre-bending artists such as Patty Larkin, Kelly Joe Phelps, Toshi Reagon, Richard Buckner, Melissa Ferrick, Cowboy Mouth, The Smothers Brothers (yes, you read that right), among many, many others (see 'Writer's Hang' below). Scott is also founder and host of The Writer's Hang performance series out of Hoboken, NJ. This residency has single-handedly created a high-quality listening room scene and has earned national recognition. Among numerous accolades, Scott and The Writer's Hang were featured in the acclaimed Sundance Channel documentary, 'Keeping Time: New Music from America's Roots,' along with Gillian Welch, Nickel Creek, Robert Randolph and others. The Writer's Hang has been running successfully for 10 years (out of Hoboken's Goldhawk Lounge), and has solidified Scott's reputation as a songwriter, guitarist and presenter. The community of artists and colleagues that have played with Scott at 'The Hang' is about 200 strong, and includes: Freedy Johnston, Richard Julian, Amos Lee, Dayna Kurtz, Phil Roy, Amy Rigby, Keren Ann, David Mead, Phil Roy, Mike Viola, Antje Duvekot, Jesse Harris, Rebecca Martin, Mike Errico, Malcolm Holcombe, Jonah Smith, Jim Boggia and many, many others. An understated and true renaissance man, Scott is also a seasoned filmmaker and television producer/director. He won two CableAce Awards (merged with Emmys in '97) for his music documentaries on VH1, and has worked with the likes of Bonnie Raitt, Daniel Lanois, Gloria Estefan, Melissa Etheridge, Take 6, Béla Fleck & The Flecktones, and many others. His television work has also appeared on A&E, MTV, ESPN, E!, TNT, Turner Classic Movies, PBS, Japanese television and many other outlets. His most recent project has blended his music and film worlds. He recently composed the score to 'A View From Below' - a riveting documentary about a single-minded explorer who has built his own submarine and taken it to staggering depths no non-commercial sub has gone before. The film hits the festival circuit in 2008. His latest record, 'Home Bittersweet Home' was recorded in Nashville, TN with producer-on-the-rise Neilson Hubbard (Garrison Starr, Strays Don't Sleep, Glen Phillips of Toad The Wet Sprocket). With a top notch batch of songs and an intimate soulful croon, the record is a lush and spacious journey, weaving moody pop textures & sultry grooves with classic Americana and R&B instrumentation, drawing comparisons to Joe Henry, Daniel Lanois and Los Lobos.