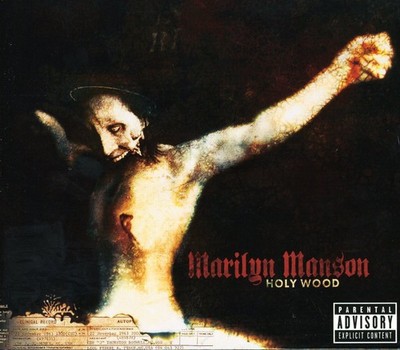 In 2000, Marilyn Manson not only was recovering from his fans' rejection of Mechanical Animals, he was scarred from Columbine and, worst of all, he was no longer America's demon dog. What was Brian Warner to do, standing on such uneasy ground? As a smart man and savvy marketer, he knew that it was time to consolidate his strengths, blend Omega with Antichrist Superstar, and return with a harsh, controversial, operatic epic: A vulgar concept album to seduce his core audiences of alienated teens and cultural cops. The resulting album, Holy Wood (In the Shadow of the Valley of Death), is intended as the third part of the trilogy beginning with Antichrist Superstar, and it's convoluted story line is fairly autobiographical, but the amazing thing isn't the story - it's that he figured out to meld the hooks and subtle sonic shading of Mechanical Animals with the ugly, neo-industrial metallicisms of Antichrist. Consequently, it's easy to see this as the definitive Marilyn Manson album, since it's tuneful and abrasive. Then again, much of it's charm lies in Manson trying so hard, perfecting details in the concept, lyrics, themes, production, sequencing, the tarot card parodies in the liner notes, the self-theft, the self-consciously blasphemous cover art. There's so much effort, Holy Wood winds up a stronger and more consistent album than any of his other work. If there's any problem, it's that Manson's shock rock seems a little quaint in 2000. Eminem's vibrant, surrealistic white-trash fantasias were the sound of 2000, while Marilyn Manson's rock operas, religious baiting, and goth gear are from an era passed. It's to Warner's credit as, yes, an artist that Holy Wood works anyway.

Here's what you say about
Marilyn Manson - Holy Wood in the Shadow of the Valley of Death.