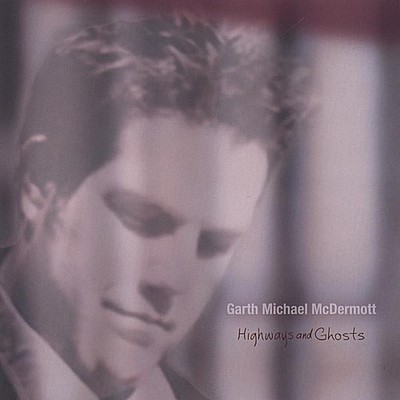 BACKGROUND: After spending his entire life on the east coast and writing songs on piano and guitar beginning at age 12, former New York City-based singer/songwriter/multi-instrumentalist Garth Michael McDermott has been calling Portland Oregon home since April 2004. Shortly after arriving in Portland, Garth began writing a new record that evolved and took shape in parallel with all that often comes with settling into a new city. What resulted is 'Highways and Ghosts' - an effort that leans away from the power-pop tendencies of his past work with his New York-based band American Lad, toward a more rootsy and personally reflective approach that he developed at his home studio where he played the majority of the guitar, piano, bass and organ tracks that would wind up on the record. From May '05 - Nov '05, Garth found himself back in New York performing his new songs and working with long-time friend and producer, Paul Umbach (Jive Records, Sanctuary Recording Artists), who co-produced, mixed and mastered 'Highways and Ghosts,' which was released in January 2006. Garth is once again residing in the Pacific Northwest and is currently putting together a new list of shows throughout Portland and the surrounding areas. MUSICAL REFERENCE POINTS: Believing the ideal songwriter becomes the voice of the collective consciousness without taking the road most traveled, Garth's lyrics weave tales of emotional struggles and internal conflicts but are laced with a sense of optimism without sounding heavy-handed. With arrangements that can be organic and understated or edgy and suggestive, and with influences that range from seminal rock staples Lennon/McCartney to modern-day tunesmiths like Neil Finn, Ryan Adams, David Gray, Aimee Mann or Glen Phillips, Garth's songs feature all the simplicity and melodic wallop to settle neatly between smart and powerful even after repeated listens. ABOUT THE NEW RECORD (from the author): 'To me, Highways and Ghosts is a testament to the strength of the dynamic human spirit. The idea that no matter what stage in life we're in, there are always circumstances that allow us to begin again. Circumstances where we get the opportunity to choose what aspects of ourselves we're going to bring forward with us, and what we've elected to leave behind. What version of myself am I going to be now? How have I grown? What have I learned? How am I different? How do I want to be perceived by others? It's about living life consciously and trying to see if we're capable of realizing and embracing the most important aspects of our lives as they're happening. The idea of 'scalable wisdom' - the notion that - 'hey, this might not be exactly how we planned it, but I can see it from a different place now and view from here is actually quite nice. Wanna come along for the ride?' WHY PORTLAND? 'I came back to Portland to release 'Highways and Ghosts' because I was very respectful of what the energy of this city did for me and my music, and I felt it was part of my duty as an artist and songwriter to replenish what I considered to be fertile soil. Instead of just absorbing the atmosphere, I wanted to add to it. After all, it was the place that allowed me to realize what I was most interested in communicating and I wanted to see if my new music had the ability to make some sort of an impression in the place it originated from. It was that "city in the woods" that provided comfort in the way I saw myself, and I thought Portland deserved to see the best of me. I was anxious to get back and start creating that perception. Highways and Ghosts is what Portland did to a New York City singer/songwriter who spent most of his adolescent life on suburban Long Island, where his earliest musical education materialized in the backseat of his parents' car in-between Billy Joel songs on commercial New York radio. I don't think the record would have sounded the way it does had I not been in a very impressionable state of mind and very open to a lot of things going on around me at the time - bands I was seeing, people I was meeting, music I was listening to and reading about. There's a rich diversity of music and art here whose participants are very conscious of their own individuality, but are as respectful of their connections with one another as they are their differences. Portland may be full of transient laborers, but I think it's what draws the people here together. It's the silent connection that makes people comfortable approaching folks and less uncomfortable when approached by others. I don't know many native Portlanders (or native Oregonians for that matter), but I do know dozens of people from all across the country happy to have settled here." "I've submitted my application and am open for business.'

Here's what you say about
Garth Michael McDermott - Highways & Ghosts.