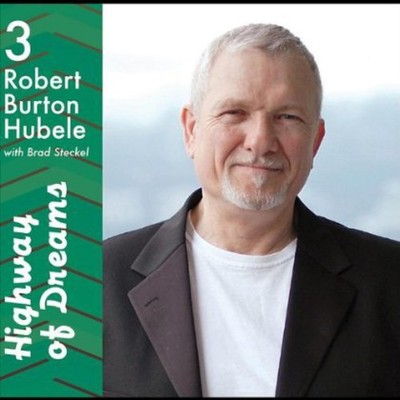 Robert's music is a distinctive and savvy melange of influences - from prairie country (Wilf Carter, Hank Williams) to deep south blues (Willie Dixon, Howling Wolf), and jazz of the swing era (Fats Waller, Peggy Lee). The stripped down production brings out the best in Robert. Once you hear his smooth husky voice, you will never forget him. Each song tells it's' own story, carved from the life of the artist or those he observes. Roberts' slide dobro (think Bonnie Raitt, Ry Cooder) adds a slinky vibe to the spontaneous and mellifluous guitars of Brad Steckel, Roberts' long time friend and producer for over 25 years. So cuddle up with your loved one, relax, and enjoy! Written by Nathan Nörgel, WP Magazine Two albums released, the Canadian songwriter and guitarist Robert Burton Hubele recently. But actually you would have about twenty songs on 'Highway of Dreams' and 'I Get Lonely' can put together. Because of the mood and the stories fit together seamlessly ago (and also form if you can not trust the numbering on the cover) part 2 and 3 of aseries of albums he has recorded and Brad Streckel. The result: songs ranging from blues and jazz for quiet moments. In previous years I heard late at night always like to have a radio show - I think - was called 'Midnight Blue'. As the DJ played softly songs from the border areas between jazz, blues and ballads. All very quiet, so relaxing but never boring. Because the rest of the songs tell little stories, everyday memories, observations from the small unspectacular moments of the day. Stories, but could often trigger feelings of happiness: Sometimes love comes just when you least expect it. Some losing to it subsequently appears as a total fluke. The Canadian singer and guitarist Robert Burton Hubele writes exactly this kind of songs. It is sometimes blues, sometimes jazz or pop rather quiet. They are always one of calm and relaxation that you can let go easily when listening. He sings of traveling in local trains, in which one responds after years the woman who always sits in the same train, but smiles. Of conversations in pubs night with the waitress about the dreams of life. Of life, which is actually the easiest to bear dreaming. The moment when you finally have the power to grant the lover that you have made a mistake but do not know if it will ever come back. Or from the red wine that can endure these moments one of the blues. Memories of personal experiences emerge and images such as Hopper with these empty streets and lonely people at Thresen. Drawn with a contagious love and sadness in their position. A sadness, but never leads to despair and resignation but also the one with the morning after waking up and still lives on. To his guitar sounding either by Chris Rea, or after a late-night jazz club shortly before the expulsion of the last guests. If required by the mood, there is also a Hammond or a piano. But never pushes the music into the foreground, leaves the story of the singer always the necessary space. Both albums can be downloaded in Germany best on his home purchase (with paypal without stress). Ask me not, as the Canadian dollar at the moment is compared to €. If you are looking for music to silent night, lonely for long trips or simply for sitting by the fireplace - this is exactly what you need for that. There are just beautiful little songs which the Canadian has written and sung here. One needs to also absolutely no reason. ***** I Am Entertainment Magazine One of Google's Top 10 entertainment magazines on the web. Reviewer: Senseisional Robert Burton Hubele is a kool kat whose sound can best be described as a Starbucks Chai Tea Latte with a side of coffee cake; it's a great way to cure your hunger and thirst for something sweet and refreshing. These songs are the perfect blend of blues and jazz, and Hubele's voice is right in the pocket, filling every void that exists on the track. Another great song is 'Red Wine' because Robert showcases his vocal savvy on top of some of the snazziest jazz music on the market today. The lyrical content is very clever and the musicianship is brilliant. The organ and saxophone solos are the two key elements that bring out the best in this tune. Hubele and his band capture the true essence of jazz music here, and they deserve a great deal of credit for it. Other notable songs on this particular CD are 'Kisses From You', 'He Thought She Looked Pretty', and 'Same For Me'. Overall, Robert Hubele has put together a solid album that anyone who appreciates jazz and blues music will enjoy. No drawbacks here, just a seasoned band and artist who deserve your support. ****.

Here's what you say about
Robert Burton Hubele - Highway of Dreams.