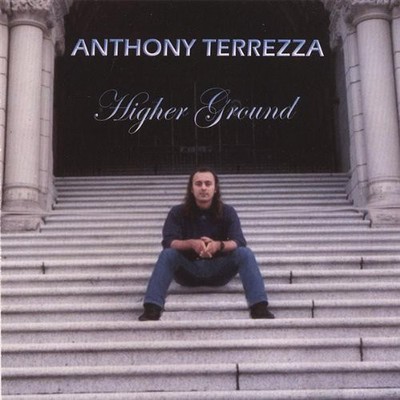 Warm, soulful guitar melodies intertwined with sultry smooth jazz undertones mixed with smokin' guitars that ring of Jimi Hendrix and Neal Schon...melded together with passionate Pop/R&B vocals and harmonies (Gino Vanelli style with Eagles-type harmonies)... Anthony's debut CD, 'Higher Ground' takes you on an uplifting journey of the spiritual, mystical and magical. After many years as a session and touring guitarist in Southern California, creating ingenious, on-the-spot electric and acoustic guitar parts for Film/TV/Movies and other artists' projects, Anthony moved to Nashville, networked with some of the best in Nashville, began playing sessions on Music Row, and completed 'Higher Ground' - all within a two year timeframe. World Class musicians and writers from Los Angeles and Nashville, are featured on this CD. A compilation of 14 uplifting songs, which include Smooth Jazz, Emotional Instrumentals, Fusion Rock and R&B Vocals, Brazilian grooves with Jazz undertones, and Country-Rock, all written or co-written, recorded and produced by Anthony! His smooth vocals (influenced by Don Henley, Gino Vanelli and Bobby Caldwell) are on 10 of the 14 songs! Throughout his career, he has had the opportunity to work with artists/musicians from bands such as Richard Elliot & Tower of Power, Survivor, Pat Benetar, Three Dog Night and Grammy Nominated Independent artist, Bob Malone, Award Winning Independent artist, Niki Smart and So. California favorite, Pamela G! An extraordinary guitarist (electric/acoustic, rhythm/solo), melodic bassist, gifted songwriter and smooth sounding vocalist. His soulful guitar playing has been compared to Steve Lukather (Toto), Jeff Beck, Larry Carlton, Neal Schon (Journey), Eric Johnson, and Jimi Hendrix. On many of the songs on 'Higher Ground' he also incorporates Midi-Guitar to access violin, flute, B3, and other instrument sounds. Grammy Nominated songwriter, Rand Bishop and extraordinary Sawyer-Brown drummer, Joe Smyth, provided the inspiration and talent that helped complete 'HIGHER GROUND'! Highlights of the CD: Outer Space - Tribute to Columbia Space Shuttle Astronauts! An emotional instrumental song Anthony wrote as a tribute to honor the crew of the Space Shuttle Columbia astronauts, who lost their lives on their way back to planet Earth. The song was recorded in one session with no editing, just two days after that tragic event. Outer Space reviews: It was GREAT! Very reflective and captivating. Excellent tones and sounds. Really captured a sense of patriotism and heroism on the behalf of the astronauts and the pride and sense of loss we feel as Americans. Mike W. Session Guitarist It is an incredible piece of work-your style is so unique-I just love it! Very inspiring & a wonderful tribute to the astronauts...Their souls are taking it in wherever they are... Sas E. Singer/Songwriter Pacific Sunset, an upbeat song, co-written with Grammy Nominated songwriter Rand Bishop, who has over 180 cuts to his credit (including the recent #1 Country Hit 'My List', recorded by Toby Keith!) With longing in his heart of the magnificence and magic of the western sunset (as he presently is living in the Nashville area), he created the music and concept for the song and Rand wrote the lyrics. Joe Smyth, the world-class drummer for the well-known band 'Sawyer Brown' is featured on this track! 'Each time that fireball, sinks into the waves, it paints a picture of what life is all about'. Cathedral, melodic guitar, guitar synth flute, violin & voicings, and fretless bass playfully dance with each other on this ethereal smooth-jazz type instrumental. Lion's Heart, Brazilian Jazz style with R&B vocals, smokin' guitars and jungle style percussion featuring Joe Smyth! When You Love Someone, a strong melodic country pop song - with Eagle-esce harmonies and memorable hook. Co-written with published Nashville songwriter David Edwards. Double Espresso in D Major, Powerful Rock Guitar Instrumental created after a Chocolate Espresso cookie and the Double Espresso that this Italian guitarist drinks daily! Born and raised in New Jersey, Anthony presently resides in Laguna Beach, California with his wife, Tina and their two cats Thunder and Puccini.

Here's what you say about
Anthony Terrezza - Higher Ground.