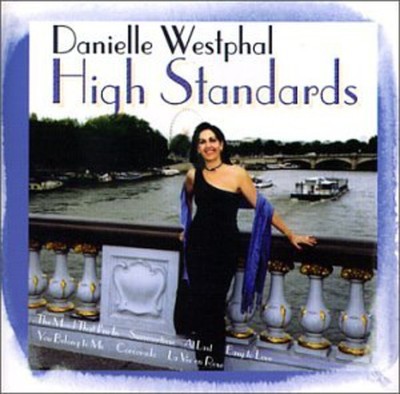 With her smooth, rich, and clear voice, Danielle Westphal has established herself as a popular and entertaining vocalist. She headlines such well-known venues as Blues Alley in Washington, DC, the Dover Downs Wine and Jazz Festival in Dover, Delaware, and performs steadily in restaurants and clubs in the Washington, D.C., area. Her warm, friendly, and relaxed style endears her to her ever-growing audience. Danielle's been performing since she was a little girl but got her real start winning leads in musicals at T.C. Williams in Alexandria, Virginia. She continued singing in college with The University of Virginia Singers and after college in local theater performances. Although born in Paris, France, to a French mother and American father, she's lived most of her life in the Washington, D.C., area, with the exception of a couple of years in Monte Carlo, Monaco. While there she perfected her French, worked and sang in a luxury hotel and did jingles for Radio Monte Carlo. She also appeared on a popular French TV show. Danielle started singing solo full-time a few years ago after performing for several years with a popular vocal quartet. She is a vocalist who likes to sing everything from classic standards and jazz to Carol King, Karen Carpenter, and Patsy Cline. Working with some of the finest piano accompanists around, she feels blessed to have them as well as other fine musicians to round out her swinging jazz combo. Her list of accomplishments includes performing twice at the White House for receptions for President and Mrs. Clinton, performing on the former Presidential Yacht, the Sequoia, singing in a popular club in Paris, France, being invited to perform on the Millennium Stage at the Kennedy Center, and producing her first CD, High Standards. The High Standards CD was released in June of 2002 and has been getting very favorable reviews as well as radio airtime, locally and around the country. It's also being played on Internet radio stations and can be heard at various times around the world. The CD contains 16 tracks and 17 songs, mostly from the 'Great American Songbook.' Dan Reynolds co-produced and did the CD's musical arrangements as well as plays the piano. Peter Revell plays acoustic bass and Mike DeLisa plays percussion and drums, giving the album a fine jazz trio. When asked what Danielle loves most about performing she says, 'I love the chance to tell stories through songs, to relate to the people who are listening, and most of all, make people feel good and enjoy themselves.'

Here's what you say about
Danielle Westphal - High Standards.