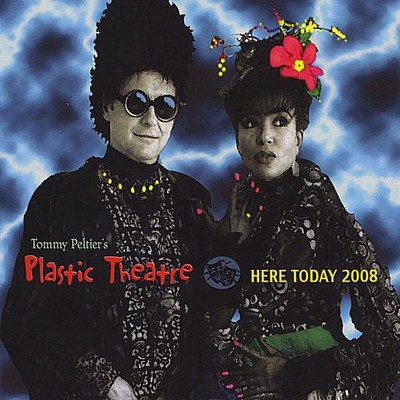 PLASTIC THEATRE is back with a new album entitled "HERE TODAY 2008." ----- Tommy Peltier - singer, songwriter, musician and innovator is constantly reinvented himself and persistently chasing the Muse. ----- During the 1960s, cornetist Peltier put together an avant-garde group called THE JAZZ CORPS. They often played and recorded at the Lighthouse in Hermosa Beach, CA. In 1966 jazz giant Rashaan Roland Kirk joined the band to recorded an album for Pacific Jazz entitled 'THE JAZZ CORPS FEATURING ROLAND KIRK." Two more CDs of THE JAZZ CORPS are also available on Cadence Jazz Records 'LIVE AT THE LIGHTHOUSE 1963-1967' Vol.1 & Vol.2. " ------ "What Peltier and the Jazz Corps have accomplished is a synthesis that works because there is thought and, above all, warn, human emotion involved. This is an album to which you should open your ears and hearts." Ira Gitler, DOWNBEAT MAGAZINE, 1967 ------ "The Jazz Corps was one of the best-kept secrets of the freedom movement of the 1960s. It reflected the innovations of Ornette Coleman and melded them with the New Orleans spirit of it's leader, Peltier. For all of it's adventurousness, the music is accessible and, nearly 30 years later, timeless and fresh." Doug Ramsey, JAZZ TIMES, 1995 ------ Through the 1970s, Peltier ( now singer, songwriter, guitar and keyboard player ) hooked up with close friend Judee Sill and put together a number of folk-rock bands. A CD and videos from that period was released for the first time Sept., 2005, entitled, Tommy Peltier FEATURING JUDEE SILL "CHARIOT OF ASTRAL LIGHT" " ... this is Peltier\'s own beguiling brew ... this mellow mix of jazzy electric folk is loose but appealing." Mick Houghton, UNCUT MAGAZINE, 2005 ------ The 1990s brought Peltier's avant-garde pop performance group, PLASTIC THEATRE ART BAND, to the clubs and concert halls around Southern California. The group performed with prominent dancers and companies such as The Rudy Perez Performance Ensemble and The Los Angeles Modern Dance and Ballet. The album \'LIVE AT LUNA PARK" was released in 1995.------ 'A global sound circus...cloudy dream poetry fusing perfectly with equally lofty music.' Arne Willander, ROLLING STONE, 1996.