News at Eleven - Here Till the End 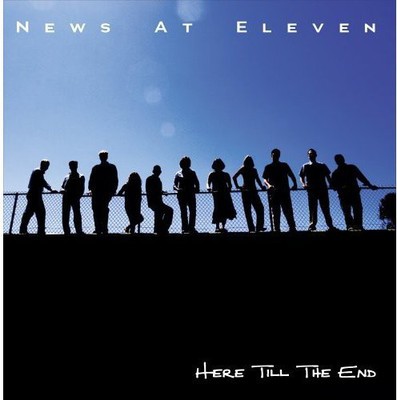 On New Year's Eve, 2002, nearly two years after the release of News at Eleven's first album, HAVE YOU NOT HEARD?, a group of friends got together in San Jose, CA to ring in the New Year. Around 2 AM, a couple of the members of News at Eleven sat down with their instruments to tinker with some musical ideas that each of them had been working on. In the nearly four years after that, the musical journey that began at that New Year's Eve party moved slowly through writing, preproduction and recording toward the finish line that is HERE TILL THE END, the sophomore effort from News at Eleven. News at Eleven's signature sound -- it's tight vocal harmonies -- will be instantly recognizable at first listen. You'll also hear a greater emphasis on lead vocals, as you might expect from a group that started as a choir and now finds itself making strong inroads into the Contemporary Christian Music scene. But this ain't just a choir of 'backing vocals' -- throughout the songs on News at Eleven's new album, the vocal ensemble frequently 'steps up to the mic' and takes over the lead vocal from the soloist, creating musical 'conversations' with the lead vocalist in the tradition of the great gospel call-and-response hymns. What will not be immediately recognizable about NAE's new album is the material. Unlike HAVE YOU NOT HEARD?, you won't see any of your favorite songs from church in the liner notes. What you will see are thirteen new, all-original songs written by members of the band. Which will be your favorite? Will it be the slowly building intensity of the opening track, 'Alleluia (Raise Your Voice),' the acoustic song for the road 'Fill My Soul,' the funky 'See What Love The Father Has,' the hard-driving guitars of 'Hold Me In Your Light, O God,' or 'With The Lord There Is Mercy,' the raucous, floor-shaking finale? Pick up your copy and find out.

Here's what you say about
News at Eleven - Here Till the End.