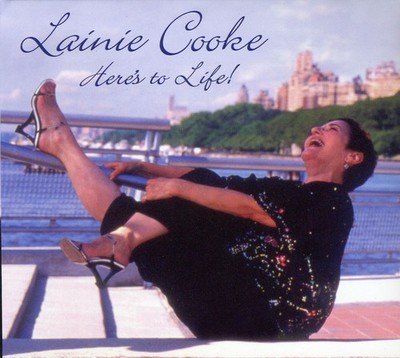 PROFILE: Lainie Cooke Probably the only talented young person in history who left New York City and 'went to L.A. to become a jazz singer,' Lainie Cooke made her first and most lasting impression in the City of the Angels as far back as the '80s. But home was and is Manhattan, so she never gave up the ninth floor apartment, nor the dream to sing and sing and sing 'bi-coastally and beyond.' The petite and powerful songbird has long been appreciated by fans in both showbiz towns. A group of regulars has turned out religiously for every live performance over the past 20-some years, and they have grown into more than fans. Those who aren't family have become friends. Now, with the release of her first-ever recording, the heretofore exclusive and savvy membership of the 'We've actually heard Lainie Cooke' Club is about to explode. And, in the liner notes of 'Here's to Life' on Harlemwood Records, Lainie turns the tables on that loyal following of family and friends by dedicating the music to them. No trumped-up advance reviews. No rave testimonials. Just Lainie, speaking from the heart. Singing from the heart is a given, as the exquisite presentation of 12 tasteful selections bears out, including: 'Close Your Eyes,' 'The Nearness of You,' 'I Just Found Out About Love,' 'Bye, Bye Blackbird,' 'Here's to Life,' and her nearly signature song by Jimmy Rowles, 'Don't Quit Now.' No one can imagine a Lainie Cooke appearance without the Rowles gem. Here's to Life, is not a chance choice as the CD's title. It's a song for all times, and one she's been singing and living since the smallest (but not the youngest) of four sisters born in Minneapolis discovered her voice at a very young age, singing on the radio at age six and with a big band at 14. When she moved to New York to take on the Broadway stage (like everyone else), her successes came instead from commercials as she became a popular voice-over artist. A theater arts major at the University of Minnesota, she had studied voice, piano, theory, etc., but it was her dramatic chops that rose to the surface before the musical chops could make their impact felt. And by the time the impulse to sing jazz, standards, cabaret and 'just good songs' took over, Lainie was making a living in the Big Apple, speaking and singing off-camera, not on stage, for Jean Nate, Asti Spumante, Ford, McDonald's, and more. Determined not to rest on her commercial laurels, 'California, Here I Come' became her theme song, and a temporary, intensely concentrated move to L.A., where she duplicated her New York presence on the stages of clubs and cabarets, was the start of the double life of Lainie Cooke. The back and forth journeys sort of backfired. While maintaining the bread and butter voiceover work, recording as an artist was always just around the corner, if one could only stand still long enough to make it happen. So, it took a little longer, and now, it finally has. In the words of jazz journalist Harvey Siders (but not on the liners, remember), 'Lainie can cook on the kind of quality standards she prefers-the Porter-Gershwin-Rodgers & Hart classics that challenge her dramatic bent for story-telling. She has an unerring ear for melodic invention, and an instinctive feel for time that allows her to take unusual rhythmic liberties. And her intonation is 'right on.'' (The Los Angeles Daily News, circa 1985.) Mr. Siders, known in his own right for finding the humor in everything, also likes to tell a certain Lainie Cooke story. It goes like this: 'So what do you do just as you begin to make a name for yourself in New York? Right-you leave the country to run a poultry farm. As it happens, she married someone who convinced her that opportunity was knocking for them in Jamaica (not Long Island), in chickens. So from 1973 to '75, they worked days on the farm, and Lainie worked nights with a nine-piece jazz band in Montego Bay, turning her Caribbean caper into a woodshed in paradise. However, when Jamaican politics turned the tourist industry around and ended the 'fowl by day and howl by night' life for Lainie and spouse, they returned to the big city where she had, thankfully, kept her upper West End apartment and her commercial contacts. Post divorce and back in the saddle, the bi-coastal trip took shape.' And when this longtime journalist and likewise 'fan' of Lainie Cooke's was contacted with the news that a CD was on it's way to him-more than 20 years after he first heard and loved her singing-what do you think he said? 'It's about time.' Not typically clever. Not original. But true, so true.

Here's what you say about
Lainie Cooke - Heres to Life.