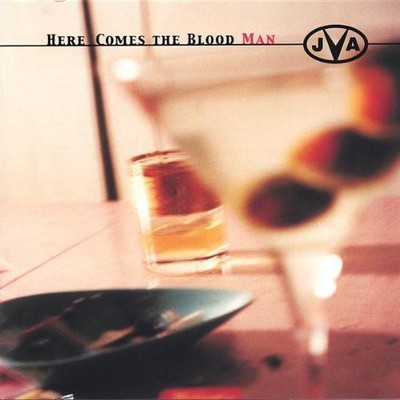 Jva's first CD 'ALEXANDER'S DARK BAND' has been reviewed in music magazines using phrases like 'a quirky, inventive blend of melodic guitar pop with cinematic accents' and 'listening to this record is something akin to rummaging through old trunks in a curio shop.' That's exactly what Jim Walker had in mind. It was probably his early training as an actor that made him approach his music in a more visual and theatrical way. Born in Los Angeles, Jim Walker played lead roles in several plays in high school, college and community theater as well as having featured roles in the films 'Last Chance Dance' directed by Phil Joanou (U2 Rattle & Hum, State of Grace) and the horror film 'Graduation Day'. During this time, he continued playing guitar and singing with several bands. Eventually acting lost out to music and he and his band Lost Anthony began a relentless full time attack, performing at every gig they could get in the Greater L.A. Basin. A nice bit of luck came when Phil Joanou asked Jim to write the opening song for his first feature film, Universal Picture's 'Three O'Clock High' Jim's song 'Something To Remember Me By' (produced by legendary session drummer/producer Rick Marotta) is featured throughout the film. Jim struck up a friendship/collaboratory relationship with Marotta and the two worked together for the next five years not only writing songs and performing live, but scoring films (Cover Girl Murders, Dead Air), TV shows (HBO's Tales From the Crypt, On the Shore) and commercials (Kodak, Hallmark). At Rick's suggestion, Walker quit his paper route and began singing TV & radio jingles (Gatorade, Kelloggs Frosted Flakes, Coca Cola). He was eventually approached about doing music for other feature films (Mirror, Mirror & Esau) and began doing character voices and voice-overs for TV & radio. He worked with Robin Williams and the original cast of Walt Disney's Aladdin film doing character voices for the Aladdin On Ice stage show. He also lived for a short time in New York while working with the Teenage Mutant Ninja Turtles, co-writing and singing songs for the Turtles Six Flags Tour...he was Donatello. After completing two Jva videos, a brief signing with RCA records and an even briefer signing with Geffen Records, Jim decided that he needed a change of scenery. He moved to Portland, Oregon where he began doing voice overs for Nike, Tektronix & Freightliner and was then cast as a the voice of a puffer fish named Spike in the children's video series, Wee Sing: Under the Sea. By chance, cast as a giant octopus named Ink was the extraordinary Portland singer/songwriter Craig Carothers. The two of them became fast friends on the project and when Craig's keyboard player, Gary Ogan moved to Nashville, Jim was asked to fill in on keys and vocals temporarily. That was in 1995. Since that chance meeting, Craig and Jim have scored the feature film 'Redline' and worked together on several CD projects for themselves and other artists. Jim performs with uber-guitarist Tim Ellis in the duo called Jva, and continues to perform with Craig Carothers. Jva's song 'Glass Thimble' was featured several times in the daytime drama THE YOUNG AND THE RESTLESS during fall of 2002. Jva's CDs 'TODAY WAS DIFFERENT,' 'FLOORBOARDS', 'ANCIENT CHINESE SECRET and 'SCENE MISSING. Were released in 1997, 1998, 2001 and 2002 respectively. Jva's latest CD is called HERE COMES THE BLOOD MAN. Released on May 15th 2003, BLOOD MAN features guest appearances by singer/songwriter Nancy Hess (Seven Day Diary), Gregg Williams (Sheryl Crow), Rob O'Hearn (Missing Persons), Jeff Leonard and Tracey Harris. HERE COMES THE BLOOD MAN was produced and mixed by CB Rock (Prince, Paul Westerberg, Guns and Roses).

Here's what you say about
Jva - Here Comes the Blood Man.