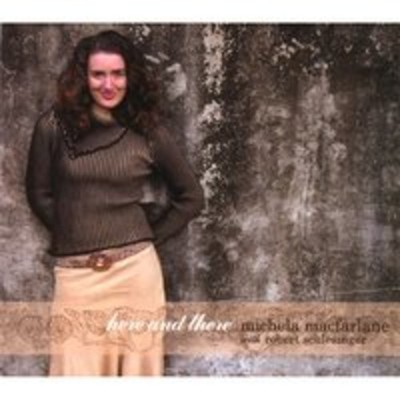 Singer Michela Macfarlane and pianist Bob Schlesinger join forces to present one of the most honest and sensuous performances to date of a delightfully unusual set of standards. Michela artfully and effortlessly spins out phrases in an almost liquid approach to singing that blends with Bob's masterful technique of forming a new take on an old song. The result: a raw sound that unfolds in the moment. Their collaborative debut CD, here and there, came about when Bob had the opportunity to get back into recording at a brand new studio out in Longmont, Colorado. Michela started coming up with these songs that basically formed a narrative of the past year of her life, songs that wouldn't necessarily be connected in any other way. They began the process of piecing the tunes together in Santa Fe, New Mexico, where each session unfolded in a progressively personal and organic transformation of sound to song and reached it's culmination in the recording studio. Each song was recorded without any overdubs, punch-ins or digital editing, which accounts for the genuine and seamless feel to the sound. Each song also evokes it's own mood, transporting the listener to somewhere new yet oddly familiar. Michela's unique sound developed through her 8-year active career singing baroque music. Her diverse list of engagements include singing three seasons with the Boston Early Music Festival, soloing with twenty different premier baroque ensembles in the Boston area as well as in Maine, Rhode Island, and Connecticut, presenting a recital tour in Romania, taking a lead role in an oratorio presented at the Jerusalem Early Music Workshop in Israel, participating in the International Baroque Singing Competition in Chimay, Belgium, and most recently performing with the Sweelinck Ensemble in London, England. A few years back she crossed over into the more popular jazz music world, releasing her first CD of standards entitled You Call It Madness in 2004 with guitarist Marc Bernasconi. Bob's work as a pianist and composer covers multiple styles, including jazz, blues, R&B, and classical. In his dozen years with singer Hazel Miller he has played Red Rocks six times, opened for James Brown and Earth, Wind and Fire, performed at the Telluride Blues Festival, Winter Park Jazz Festival, Jazz Aspen, and with the Longmont Symphony Orchestra. Bob also writes soundtracks for films, video, commercials and theater.

Here's what you say about
Michela Macfarlane - Here & There.