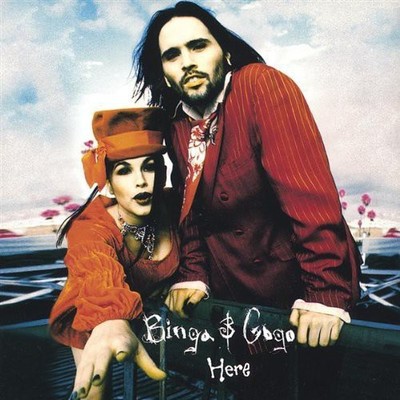 Binga & Gogo's collaboration is a natural extension of a lifelong link; a story spread across three continents and two lifetimes, with reference points including a Federal prison and Disneyland. Binga & Gogo are siblings; soul mates on a remarkable musical mission. She is the vocalist, a Euro-pop chanteuse one second, heart-melting soul poetess the next. He is a bandleader and arranger, a keyboard player with iconoclastic piano style illuminating an orchestral archway into a vivid sonic soundscape. Together they craft inventive and memorable modern pop songs. Binga (nee Tomasina Abate) was a performer virtually from birth. She vocalized in the crib while her father, a rock musician, would rehearse his band. At age four, her mother would dress her up as a floozy, have the family all shine flashlights on her while she'd sing 'Hello, Dolly.' From these auspicious beginnings it was a short leap to procuring costumes from Goodwill and producing entertainment for the neighborhood kids. Tomasina would appear during intermission at backyard boxing matches to sing selections from Annie, while the bruised and bloody were attended to. Gogo (nee Joseph Abate), younger brother, was her co-conspirator. Due to the limitations of his original instrument -- the TV Guide, which doubled as his drum kit, he progressed to the actual snare drum in elementary school, then learned guitar and trumpet. When the marching band needed a baritone horn, he mastered and marched; when the school jazz band needed a trombone player, he studied the slide. Based on his musical abilities, he enrolled at the prestigious Los Angeles County High School for the Arts. The two grew up in Lakewood, California, a suburb where vestiges of dairy farms and Dutch Villages were fast dissolving into strip malls and fast food franchises. Binga & Gogo were their childhood nicknames. A convergent musical destiny began as they performed together in show choir and sang and danced for the elderly and infirm at convalescent homes. After high school, Joseph joined the Navy and trained as a nuclear power engineer, but disillusioned, he went AWOL. When he was sentenced to incarceration in the Navy's grim Miramar Prison, he began writing songs and conceptualizing a band with his sister. Tomasina's first professional job was performing on The Queen Mary. She landed a gig in Japan and toured the country with recording artist, Anri. She then joined a show in Monte Carlo, came back to the U.S. performed at Disneyland, went back to Monte Carlo, returned to California and played Pocahontas at Disneyland, five shows a day for a year and a half. 'But what I really wanted to do,' stresses Tomasina, 'was write and sing with a band.' Out of prison, with Tomasina toiling for Mickey Mouse, it seemed to Joseph like a fortuitous moment to invite his sister to form an act. Accompanied only by a keyboard, the duo put together a short list of songs, held a garage sale, sold a car and pooled their funds to take their show to Europe. With no bookings whatsoever, they found work in Nice,France, in an intimate establishment with visible connections to the French Mafia. Eventually, Joseph returned to the U.S. and devoted his energies to mastering the piano, progressing from his cheesy Casio keyboard to the works of Mozart and Chopin. Tomasina stayed in Europe. When she returned stateside, the two resumed their collaboration. They knew they had something special from their first show at Hollywood's Crooked Bar. They began recording their debut CD. 'I give Tomasina what she wants, what makes her feel right, the vibe to the song,' explains Joseph. 'I developed a simplistic style on the piano. Sometimes I play with two fingers. I don't tear it up, I use it as a rhythm instrument.' Tomasina works on instinct; Joseph is a technical taskmaster. The two's synchronicity is based on a common genealogy, ideology, and balance. 'Our songs are like a toy box,' concludes Joseph. 'You love the box completely, but you can't individualize anything in it: that's our music. ####.

Here's what you say about
Binga & Gogo - Here.