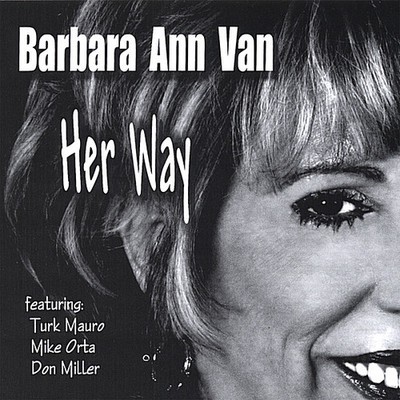 This album represents months of tears, laughter, Joy, flaring tempers and creativity, we would all do it again in a New York Second. The music is a compilation of Jazz Blues and Ballads some of them done with unique and different arrangements. Mike Orta, piano, keyboards and arrangements delivered a solid tight backup for me. The musicians nicknamed " Barbara's Boys " for this project all have successful careers on their own with various groups here in South Florida. I was fortunate enough to be able to pull them away to go into the studio with me to record music that was near and dear to my heart as well as theirs. Indulge me with a few words about these guys. Mike is Associate Professor and Director of Jazz Performance at Florida International University as well as the FIU Latin Jazz ensemble.He is much in demand here for local gigs and concerts as well.Mike also travels on the road with major names in the industry like Arturo Sandoval. Turk Mauro, saxaphone is a world renown artist who lived in France for 7 years, hails from New York and has several albums of his own on the charts. Don Miller, acoustic bass is a featured columnist for Bassics Magazine and studied under the late Jaco Pastorious as well as others.He is the bassist of choice for George Benson, Ramsey Lewis and many others. Nicky Orta electric bass, yes he is Mike's brother, has toured the country with numerous big names in the music industry and currently works with Sammy Figueroa Latin Explosion Band,a Grammy Nominee in concert and on his albums. Danny Burger on drums what can I say about my beat man? Hails from New York also. Has worked with many of the greats too numerous to mention, but has made a name for himself in South Florida for over 15 years now also in demand for gigs here. Danny keeps me in time at all times and has the greatest smile you've ever seen on a drummer.Every female vocalist down here calls Danny her drummer but he truly is my 'beat man' and has been for some time now.He is the drummer of choice on many South Florida Artists recent CD releases. Don Cail on flute from New England has been in several of my bands in the past and Is currently teaching piano and saxophone at a local magnet school in Fort Lauderdale. About Barbara......She began singing at the age of 6 on a local childrens radio program, grew up hearing Big Band music and the Great American SongBook all her life. Dabbled in singing rock and country music, but knew she always wanted to sing the great standards of the 1940's and 50's. She primarily listens to Frank Sinatra and Rosemary Clooney,Carmen McCrae and Diana Krall.This is her second album and the one that means the most to her, She hopes you enjoy what you hear . For all you Sinatra fans out there, Barbara feels he was the best of the best and honors his memory with her rendition of a few of his classics.Keep the music in your hearts always.

Here's what you say about
Ann Van, Barbara Ann - Her Way.