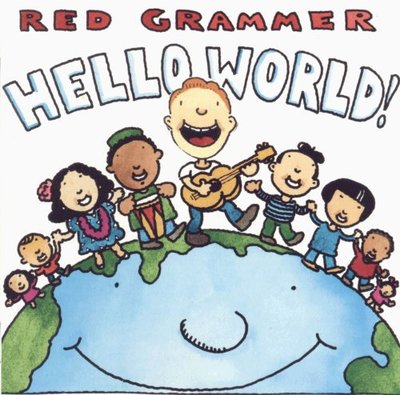 Winner of a 1996 Parents' Choice Gold Award and a USA Kid Pick Red Grammer is an award-winning singer and songwriter with a clear alike, Red is a skilled performer with an outstanding tenor that is recognized as one of the best in the business. Raised in Little Silver, New Jersey, Red completed his first two years of college at Rutgers University and then transferred to Beloit College in Wisconsin where he met his wife and co-lyricist, Kathy, a special education teacher. They began collaborating on children's music while Red was still lead vocalist for the legendary folk group, The Limeliters. Believing that other children might enjoy the songs, games and finger plays that they had written for their young son, Red and Kathy released their first album, CAN YOU SOUND JUST LIKE ME?, in 1983. Introduced on National Public Radio's All Things Considered, their first recording was received with open arms by the critics. They still did not view themselves as children's musicians -- just musicians. That would soon change. Encouraged to write another album for children and inspired by 'The Promise of World Peace' statement issued by the Baha'i' World Community, Red and Kathy set out to create an album illustrating what children and their families could do to bring about peace. In 1986 the groundbreaking recording, TEACHING PEACE hit the market. It was immediately heralded for it's ability to address such topics as acceptance of diversity, self-esteem, and cooperation. What seemed unusual about the album, however, was that it could do all that and tickle a child's funny bone. Parents embraced the album -- they loved Red's voice and the messages in the lyrics. Grammer had not only become a commercial success, he had become an overnight sensation in the educational community as well. This remarkable recording was honored by Parents' Choice with a Classic Children's Audio Recording Award-- an award few albums ever achieve. The All Music Guide declared TEACHING PEACE 'one of the top five children's recordings of all time.' As children, parents, educators and reviewers were discovering, there was something very special about what the Grammers had created for children. At the same time, Red was discovering, as a performer, the perfect venue for his natural playfulness, vocal talent, and artistic sensibilities... The family. His clear, high tenor voice, and the songs that he and Kathy were writing for it, were tailor-made to entertain and inspire everyone from toddlers to grandparents. At long last he was finally 'home' and his audiences knew it. Today Red has become one of the most sought after children's' performers in North America, appearing in major performing arts centers and children's festivals, as well as local theaters and schools, all across the U.S. and Canada. Together, Red and Kathy Grammer have a unique talent for conveying messages of hope and giving voice to children's feelings-- entertaining, inspiring and educating with every beat.

Here's what you say about
Red Grammer - Hello World.