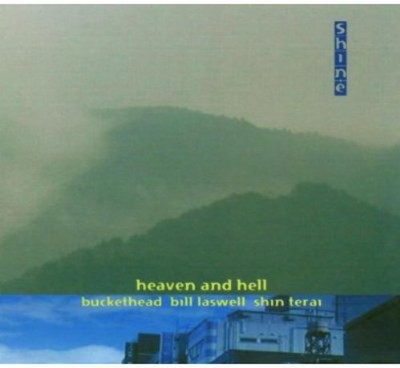 After more than ten years of steady collaboration both on stage and in the studio, bassist Bill Laswell and mutant ninja guitarist Buckethead join forces once again on Heaven And Hell-a full-length dub-style excursion that also features sound collage work from Shin Terai (the original Chaos Face of Subharmonic fame, and whose 1999 debut album Unison was co-produced by Laswell). Reminiscent of some of their more extended psychedelic forays as part of the avant-shred combo Praxis, Laswell and Buckethead have consistently displayed an almost symbiotic rapport when it comes to composing. For this particular trip, they rely primarily on instinct to create a lush, flowing suite of low-end dub fugues laced with radical sound effects-echoes, flanges, envelopes, distortion and signal noise-and unrelenting grooves that will surely have even the most jaded listener trancing out in no time. When asked how he first met Buckethead, Laswell points to a series of connections among like-minded musicians that have always seemed to play a role in any project he conceives. In this case, those connections stretch back to 1990, when Laswell had been recruited to produce the debut of an SF Bay Area punk-funk outfit called the Limbomaniacs. 'I'd originally worked with Brain [the drummer from the group, and eventually the beat anchor with Laswell and Buckethead in Praxis] when we were putting together the album [Stinky Grooves, on the now-defunct In-Effect/Relativity label], and he told me about Buckethead and gave me a video of him playing in his room. I gave that to Bootsy Collins, who I was also working with at the time, and who it turns out Bucket is a big fan of. After that, Bootsy and I sort of got him involved in experimenting more, instead of committing to a full-on career with a corporate situation, which was what he almost got into at the time with Sony.' Buckethead eventually did 'go career' a couple of years back when Axl Rose invited him to be the main axe handler for a recalibrated Guns 'n Roses-but that hasn't stopped him from delving into weird sonic territory, as Heaven And Hell so vividly depicts. The seven 'movements' recorded here could be likened to a sci-fi movie soundtrack or an alien broadcast from deep space, with subtle changes in sound happening with an intelligent design all their own. 'Movement 1' opens with what sounds like radio signals and controlled feedback, until a gong announces the start of a rimshot-based, almost jazzy shuffle, with Echoplex effects and what sounds like bowed bass throbbing through the mix. When Laswell's inimitable dub bassline finally does kick in, the mood for Heaven And Hell is firmly set. When asked about the influence of the dub style in his music, Laswell waxes philosophical. 'Dub goes back to the beginning -- thousands of years back,' he notes. 'You can trace this repetitive low-end sound back to Indian and African music, and it's still basically the same feel. There's an ancientness to it, but it also has a futuristic sound because of the depth, the space and the mystery.' Buckethead taps deftly into that mystery, bringing with him his usual array of guitar gadgetry and his consistently mind-blowing command of melody, chordal arrangements and sheer pyrotechnics. On 'Movement 2,' he follows Laswell's fretless bass with a liquified rhythm guitar that sounds strangely Eastern in his choice of stacked and sliding three-note chords. When he gets to 'Movement 3,' where Laswell changes up the bassline to a more envelope-shrouded dub line, the fretless bass theme repeats again and Buckethead bursts forth with a short but beautifully expressive Hendrix-like solo that might have come from Rainbow Bridge (the studio album documenting Hendrix's much-touted 'sound experiment' that was performed live on the island of Maui in 1970). 'Movement 4' offers the first real break in the music, where reverb effects on the rimshots become more prominent and Laswell eases into a darker-sounding 'four-on-the-floor' bass hook. Buckethead's underwater Mutron guitar floats beneath the edgier 'crunch' sound that he lays on top, with high-pitched siren sounds flying up into the stratosphere (toward heaven, no doubt). The feeling is almost orchestral, segueing into 'Movement 5' with feedback that sounds like violins, until Laswell brings it back down to earth with the low end that guides the rest of Heaven And Hell into a head-nodding nether-region of time, space and more Echoplex dreams. Back in early 1996, Bill Laswell told Bass Player magazine that the dub aesthetic seemed destined to find it's way into other styles of music -- as it already had with what was then being called trip-hop and the still-nascent drum 'n bass scene. 'I find dub influencing a lot of things I do that have nothing to do with the genre. I hope dub becomes a vital influence in other areas, in the same way that hip-hop is influencing other styles; that would make them a little freer and a little less predictable. It's going to take genres like dub to attack other pop sensibilities.' Laswell and Buckethead have each made a living out of attacking complacency in the music 'industry,' and with the way-out direction in sound they take on Heaven And Hell, it's clear that the battle is still on and moving ever-forward. Or, as Buckethead himself has described, in his ever-inscrutable southern Cali patois, the work he's done with Laswell: 'It's weird ambient stuff, like a total binge loaf. It's like terror long dangler buddies on a scoop rack.' Dig that.

Here's what you say about
Shine - Heaven & Hell.