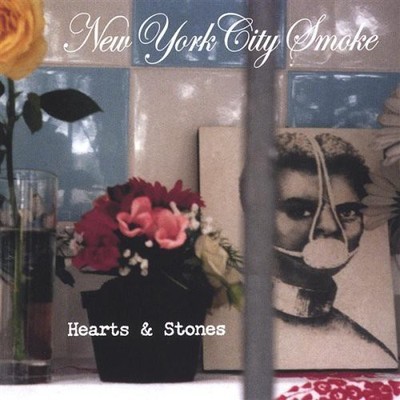 NYCSmoke 'Songs inspire me, and I guess that's why I write them - to inspire other people,' says the singer, guitarist and founder of raw rockers NYCSmoke. 'I've been inspired to write music, but it could make other people want to paint a painting, talk to a friend, or just get someone through another three minutes of their life.' It's that kind of unshakeable belief - that great songs can lead to great things, and even save lives - that drives NYCSmoke's passionate new album, Hearts and Stones. The latest chapter in Statland's prolific career, the CD is 11 songs of sharply crafted messages, naked aggression, soulful rock singing, longing, guitars and more guitars. Each track reveals a new side of the young NYC warrior, who sees this latest work as a major development in his intensive study of songwriting. 'This is a straightforward rock and roll album with smart lyrics,' he says simply. 'Hearts and Stones' is just like reading a short novel. Each song has a beginning, middle and end, like a story. The first song, 'Finally Mine', is about taking back the time that you spent with somebody after you've broken up with them. It's not about regret, really, but taking responsibility for your actions. I'd like to think that's something that's happened to me.' Drama made even more powerful through music is everywhere. The song 'Last Vacation Day' sees ringing acoustic guitars riding over a strong drum beat until the chorus, when Statland and his guitar scream with electricity about a person who's about to enter an insane asylum. Later, the strong beauty of 'Brooklyn' provides an unforgettable release, as Statland lays his obsessive tendencies bare for all to see, singing 'I want to be the code that you break/I want to be the pills you need to take...' Hearts and Stones is the follow-up to NYCSmoke's well-received debut, For the Posers. The band toured extensively across the US at venues such as the Bowery Ballroom (NYC), The 9:30 Club (DC) and The Metro (Chicago), on the strength of the single, 'Wine and Roses', which has been played on KROCK and Q104.3 in NYC, as well as college radio in the US and England. The band has shared the bill with such acts as Interpol, Franz Ferdinand and They Might Be Giants. Statland formed NYCSmoke in the aftermath of several years with Thin Lizard Dawn, the dynamic power-pop four-piece with two critically acclaimed releases on RCA Records. Statland also wrote, directed and scored the widely screened independent indie films 'Low Flame' and 'NYCAria'. He has also written movie scores for directors such as Ralph Steiner, and collaborated with composer Philip Glass. NYCSmoke is made up of Statland, Anthony Settecase on guitar and vocals, Kevin Fox Haley on bass and vocals and Scott Lipps on drums and vocals. For Statland, who started out inspired by such no-nonsense acts as Lou Reed and the Who, songwriting is a cathartic process. 'For me, personally, it's very selfish, and in turn selfless,' he says. 'It's about me and what I'm going through. Maybe someone else has those feelings, hears the songs, and finds something they can relate to. I've listened to 'Quadrophenia' throughout my life and been I've been saved by that album repeatedly.' A survivor of the incredible highs and terminal lows that comes with a full-time music career, Statland knows that even as he's hit his stride with the gritty sophistication of NYCSmoke's Hearts and Stones, his job is just beginning. 'The biggest thing to me is doing the work itself, and everything is just miniscule outside of that,' he notes. 'The process of making the record is more important than the product itself. It's that feeling of 'I've done it. I'm ready to do the next one.''

Here's what you say about
Nycsmoke - Hearts & Stones.