Lil' Mo - Hearts in My Dream 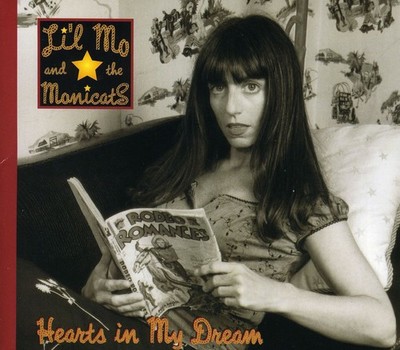 I remember the frst time I heard Emmylou Harris and her excellent "Pieces Of the Sky" LP. Her crystalline voice made the most mundane tune shine like a fine jewel. Monica Passin is a pretty fair country singer herself and makes the comparison easy on this excellent independently produced CD. Like Emmy, Monica sings from church with delicate finery. But she has a sly side, too, and like Maria Muldaur (from the Warner Bros. Years) she quivers, shimmies, and flirts- especially on "The Great Indoors." From the rockabilly of "Wait'll I Get You Home" to the absolutely gorgeous "Still Cryin'," Monica shines with a passion and talent rarely equaled. There's a lot more bluegrass and traditional music than one would expect on this, considering it's retro cover. But 'Hearts In My Dream' proves that not all alt. Country is electric guitars and three chords. In fact, there's very little "alt" about it. A couple of shuffles, "I'm Still Walkin'" in particular, allow Monica to charm snakeskin off'n a pair of boots. While the cover tunes show respect for the classics- Roger Miller and George Jones' title track and Don Everly's "The Sun Keeps Shining" - the sassiness of "The Great Indoors" and the tenderness of "I Will Give My Love," both written by Monica, are far more impressive. And "Still Cryin'" is one of the best doggoned songs I've heard in a long time, with excellent pickin' from Tony Trischka and classic harmonies by Y'All. This is an album that can sit next to "Pieces Of The Sky" and not feel the least bit intimidated. -A Daily Dose Get Your Dose of Music Michael Clark, reviewer Passin is an uncommonly mature honky-tonk singer who unearths a terrific lost George Jones tune for the title track and positively nails Don Everly's "The Sun Keeps Shinin'.'' Her own "Still Cryin' '' may be the set's highlight, and "The Great Indoors'' is a sassy come-on that would play well on any gray snow day in Minnesota. ..."Wait'll I Get You Home'' just may be the sexiest swing dance song ever... -Jim Walsh, music critic St. Paul Pioneer Press (Minnesota) Making her move rather late in the year, Monica Passin walks away with my vote for BEST COUNTRY SONG OF 1999. It may not hurt that 'Still Cryin'' features Fats Kaplin on fiddle and Tony Trischka on banjo, but Passin demonstrates right there that she can write and deliver outstanding country music in the classic mold. And she has at least one follow-up A side in 'It Just Doesn't Add Up.' Her eponymous 1997 debut came across, very appealingly, as a one woman jukebox, a collection of handcrafted singles rather than just an album, the fact that she's based in NYC adding a dash of exoticism. This time around, she retains very much the same 'Greatest Hits' feel but has risen to a whole new, even more impressive level. Passin is a shining example of the real benefit of alt. Country-- it provides a shelter for people who still practice the art of real country. -John Conquest, editor 3rd Coast Music (Austin) Monica Passin, whose stage name is Li'l Mo, is one of New York's most committed and undiluted country singer-songwriters. With her band, the Monicats, Li'l Mo has recently issued her second album, Hearts In My Dream, on her own Passin Fancy label. Like the first Li'l Mo album, the new one boasts superior writing in a variety of country sub-genres, great taste in cover songs, inspired playing, and vocals that are skilled, sincere, and transporting. Her talent deserves national recognition. - Jim Steinblatt ASCAP News Performing Songwriter Magazine For a hard country traditionalist like me, an album like this is pure heaven. Well, heck, just take the title track -- a picture perfect version of one of the best early George Jones heart songs -- and you'll know why I'm hooked. New York songstress Monica Passin (aka Lil' Mo) proves herself not just an apt pupil of old-style country, but a master of the craft as well: originals such as 'It Just Doesn't Add Up' could easily have entered the hallowed ranks of first-class songwriting in the Nashville of years gone by. Along with tasteful novelty songs like that one, Lil' Mo also chirps out a few hiccupy rockabilly tunes and caps it all off with a pair of stunningly beautiful ballads in the Carter Family style ('Still Cryin'' and 'I Will Give My Love'). Her band knocks out some of the best hard country riffs you're likely to hear outside of a Bear Family reissue, with classic Hank Williams-derived pedal stell and an occasional fiddle breakdown... This is the kind of record that makes the whole alt-country revival worth it: there isn't a false note on the entire album, and Passin pours her heart into every song. - SLIPCUE.COM ("Hillbilly Fillies")

Here's what you say about
Lil' Mo - Hearts in My Dream.