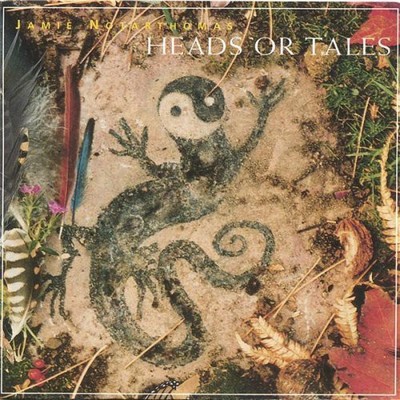 Heads or Tales, 1995 'Jamie's second CD, recorded with the band, displays his ability to weld music and art. Notarthomas roams across several genres on Heads or Tales while hewing a holistic 60's outlook on life & love. He goes from Jazzy blues to funky rock to celtic swing & back again, meeting the demands of those vocal styles while keeping his own identity intact.' Dan Aloi - Elmira Star Gazzette Special guests on 'Heads or Tales' include Blues Traveler's John Popper and Trey Anastasio of Phish. Jamie Notarthomas hails from the Syracuse, New York area. Over the years Jamie has been a featured act at many of the region's premiere festivals, such as the Blue Heron Festival, Grass Roots, Bethleham Music Fest, Lilac Fest, Hookaville, and the Harvest Moon Jamboree. He has also written, recorded with a number of notable musicians such as Trey Anastasio, John Popper, 10,000 Maniacs and David Bearwald of Sheryl Crows Tuesday Night Club. Over the many years he has spent consistently touring, Jamie has opened for many greats including Bob Dylan, The Replacements, Melissa Ethridge, David Burne, Rosanne Cash and performed on stage with the likes of Alan Tousant, Rick Danko, Keller Williams, and Hot Tuna. His highly provocative lyrics have been used for independent documentaries on subjects of gun control, the environment, and the homeless. His song 'Minus One' has been the topic of law school discussions and college term papers about the death penalty.  His music is used as the theme song for the Buffalo TV show, 'Human Touch' and in a National Geographic documentary. With exception of surprise guests joining Jamie on stage, he has played solo for the last 8 years. He's been known to pound out three to four hour marathon sets. Once a year Jamie performs a Bob Dylan Birthday Tribute, as he is fluent in well over 100 of Dylan's great songs. On special occasions he can offer a similar study for a dozen more mentors whom are known for their unwavering, honest, and timeless vision.

Here's what you say about
Jamie Notarthomas - Heads or Tales.