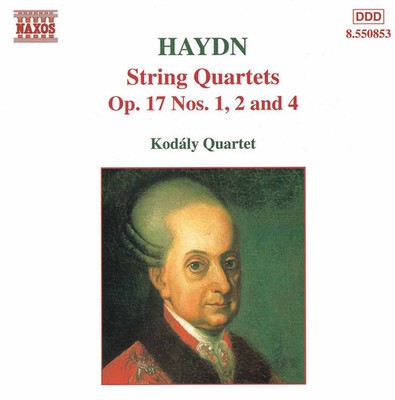 The String Quartet in F major, Opus 17, No.2, opens with a first subject entrusted to the first violin, which provides much of the thematic material to the obvious dismay of German critics of the time, who deplored the lack of counterpoint in works of this sort. In the repeated exposition there is thematic variety, with a passage of relaxation before the codetta. The material is duly developed in the central section, making much use of the opening figure of the principal subject and allowing initial dialogue between the viola and cello. In the String Quartet in E major, Opus 17, No.1, the first violin again handles most of the melodic material (at first), ascending to the heights as the repeated exposition nears it's end. The cello starts the central development, with a reminiscence of the opening figure of the principal subject, and rapid first violin triplets, first heard in the exposition, before the return of the principal theme starts a false recapitulation, extended by the cello in sequential writing, before the recapitulation proper. The Menuetto allows the instruments to enter in ascending order, with a suggestion of canonic imitation in it's second half. The Trio in E minor provides brief contrast, before the return of the framing Menuetto. The same key of E minor is used in the following Adagio, in 6/8, opening as an aria for the first violin and providing, as it continues, resolving dissonances in it's accompanying parts. The melody moves into G major, with a second violin arpeggio accompaniment, providing the additional substances from which the rest of the movement is constructed, and offering music of delicate beauty. The mood changes, as it should, in the final Presto. There are moments of dramatic excitement in the closely related second subject of the repeated exposition, and in the ascending melodic line of the first violin in the development, with a final surprise in the relatively abrupt ending of the movement, as the sound fades away. The String Quartet in C minor, Opus 17, No.4, in it's numbering and present inclusion in this order reflects the alternative numbering of the quartets here offered as Nos.17, 18 and 19 respectively. The numbering in the widely used Hoboken catalogue allows the same quartets, (Opus 17, Nos. 2, 1 and 4), the numbering 26, 25 and 28, preferring, in it's own listing, the order of first publication. The mood is established in the opening C minor theme, and continued in the E flat major secondary material of the repeated exposition. After the development the first subject returns, first in it's secondary, E flat major form, succeeded by the key of C minor is re-established. The movement ends with a gradual diminution of sound, before the charm of a C major Menuetto, with a Trio in the tonic minor once more. The Adagio cantabile in E flat major starts with a first violin aria, to which the accompanying figuration of the second violin provides an important additional element. The first material returns in varied form, the first violin melody embellished this time and leading ultimately to the return of the principal theme, now in the dominant key. In what follows, the earlier accompanying figuration plays a considerable pan, heard now in the cello and then in the first violin and, from time to time, in the inner parts. A brief first violin cadenza leads to the final section of the movement. In the final Allegro the opening first violin figure has an important part to play, being passed from instrument to instrument, before the secondary material, with it's double-stopping in the first violins. The useful opening figure makes an inevitable return in the central development and to introduce the varied C minor recapitulation. Leading to a final coda, with it's memories of elements of the second subject.

Here's what you say about
Kodály Quartet - String Quartet Op 17 #2 in F Major.