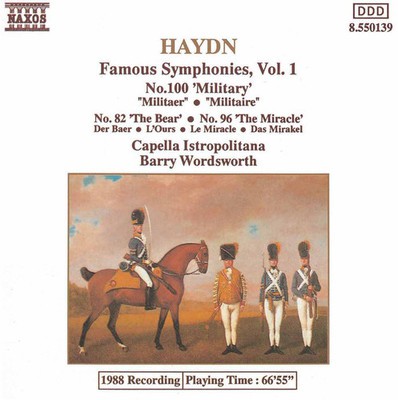 Joseph Haydn was as prolific as any eighteenth century composer, his fecundity a matter, in good pan, of the nature of his employment and the length of his life. Born in 1732 in the village of Rohrau, the son of a wheelwright, he was recruited to the choir of St. Stephen's Cathedral in Vienna at the age of eight, later earning a living as best he could as a musician in the capital and making useful acquaintances through his association with Metastasio, the Court Poet, and the composer Nicola Porpora. The first movement opens, as do most of the London symphonies, with a slow introduction, the solo oboe leading to the Allegro, in which the first violin proposes the principal theme, followed by a subsidiary theme in which the woodwind instruments at first answer the first violin. The development seems to end with a sudden pause, but what follows is in another key, leading eventually to the recapitulation proper. The G Major slow movement allows the wind instruments a gradually increasing share, after the announcement of the principal theme by the first violin. There is a Minor middle section, before the return of the main theme, with scoring for two solo violins. The Minuet calls for the full orchestra, with it's flutes, oboes, bassoons, horns, trumpets and drums, while the companion Trio is dominated by the solo oboe. The finale is opened by the strings with the principal theme, a lively and delicate rondo, that includes an excursion into the Minor, with the same theme, and a contrapuntal development of the material. Symphony No. 82 in C Major, the first of the set, was written in 1786, one of a second group of three in order of composition. All seem to have been played for the first time during the 1787 concert season, when they were enthusiastically received. No. 85 appealed particularly to Queen Marie Antoinette, and was thereafter known as La Reine, while No. 83 became known as La poule, a reference to the clucking of a first movement melody rather than to any lady of the French court. No. 82 won the nickname L'Ours, The Bear, from the bagpipe bear-dance that opens it's last movement. The symphony provides a fine opportunity for the premier coup d'archet, the unanimous attack at the beginning of a work, a feature on which French orchestras prided themselves and that Mozart had found unexceptional. The gentler second subject of the first movement follows relatively startling discords. The slow movement, not a particularly slow one, offers two themes, the first in F Major, the second, a related one, in F Minor. These elements are repeated with variations, with a final repetition of an even more varied version of the first theme, followed by a coda. The French-style Menuet and it's contrasting Trio leads to the famous finale, with it's opening bagpipe drone from the cellos and double basses, and bear-dance violin melody, elements that dominate the rest of a remarkable movement.