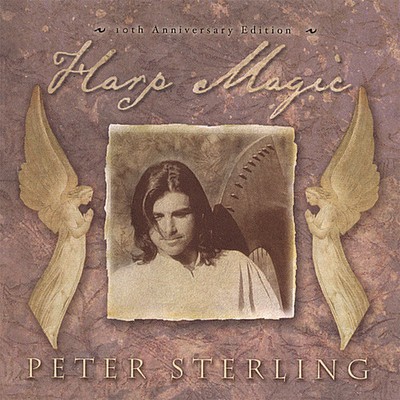 Meet Peter Sterling There have been timeless musicians throughout history whose hands seem to be guided by unseen forces. Possessing unexplainable musical genius, the exquisite beauty of their songs have delighted and mystified audiences the world over, somehow connecting us closer to heaven. Peter Sterling is one such musical treasure. A harpist of world-class skill, Peter's eclectic music continues to touch the lives of thousands around the world. Devoted listeners over the years have consistently reported greater peace, spiritual visions, and even miraculous healings while listening to Peter's heavenly albums, suggesting the astonishing potential of his uncanny musical gifts. A precious few can claim the musical foundations that led Peter to play the harp. His unusual and inspiring story truly began during a series of life-altering divine encounters while living outdoors in the peaceful solitude of Sedona, Arizona's Red Rock canyons. Spending countless hours at it's sacred vortex sites practicing yoga and meditation amidst the brilliant scenery and vast silence, Peter one day experienced a genuine spiritual vision of angelic beings in a heavenly choir surrounding him. In this profound vision, Peter saw himself strumming a harp and allowing divine music to flow through him. Although Peter showed considerable musical talent as a child, having played the piano by ear and then dabbling with the flute and guitar over the years, music had not been a prevalent part of his life. Overwhelmed by the grandeur of this angelic experience, Peter waited for the next series of synchronicities to guide his choices. Only a week later, Peter happened to meet an accomplished harpist who was selling a Celtic harp. Quickly acquiring the instrument and receiving one brief music lesson, Peter retreated back to the canyons where he humbly beseeched the heavens atop a red rock peak to allow the music of the harp to flow through him. Almost immediately his prayers were answered as he began to instinctively strum chords and simple melodies. 'It was as if my hands knew what to do,' Peter said. It wasn't long before the beginning melodies matured into distinct songs, closely resembling the heavenly tones he once heard among the silence of the canyons. Incredibly, Peter recorded his first album, Harp Magic, after a mere ten months with the harp, demonstrating a skill-level most experts would consider impossible after such a brief time. Nevertheless, this is the 'magic' of Peter's remarkable story. Harp Magic went on to be nominated for the 'Naird Indie Award' for best string album of 1994--a national honor. And now ten years later Peter's CD 'Harp Dream's' went to #1 on the N.A.R. top 100 radio playlist for 8 weeks in 2004 making it the most played new age CD in the United Staes, Canada and Europe. And was then nominated for 'Album of the Year' by the same organization! As a result Peter signed with the prestigious record label 'Real Music' for the world wide release of his latest work 'Shadow, Mist and Light'. His earlier celestial sounds have evolved into a contemporary instrumental mix of world fusion, with an impressive advancement in his melodies complexity, groove, and inspirational quality, sounding at once seductive, hip, and angelic. Peter's music and presence are frequently requested around the world, especially by best-selling authors and spiritual teachers Neale Donald Walsch, Doreen Virtue Ph.D., and James Van Praagh. Recently featured on the Tonight Show With Jay Leno, Peter's music continues to broaden in it's appeal. Offering flavors of jazz, classical, world music, and New Age styles, Peter's music can be as rhythmic as it is healing. Peter tours North America extensively, bringing his healing music to workshops, expos, and also hospitals and nursing homes where he continues to explore the field of sound therapy with the sick and elderly. Peter is also a guide to the sacred sites of Sedona and an accomplished stained glass artist. He resides in Sedona, Arizona. ------------------ A career making tour de force demonstration of all the hallmark techniques of a world class player.' P.Jâs Picks, New Age Retailer 'He easily creates the ambiance of perfumed heavenly gardens and soft misty beaches.' Napra Trade Journal. ·deserves ongoing mention as an unusual winner.' The Bookwatch.

Here's what you say about
Peter Sterling - Harp Music.