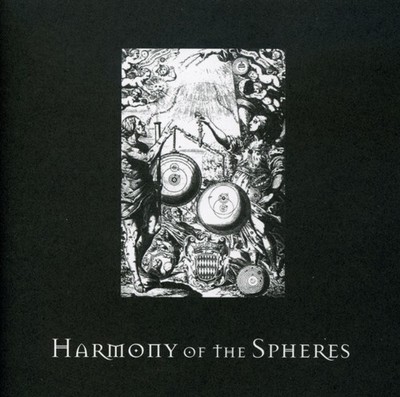 The Harmony of the Spheres package was one of the most beautiful LP collections ever released. A triple LP in a black box with hand-screened art, it was a sight to behold. Six artists were featured - Bardo Pond, Flying Saucer Attack, Jessamine, Roy Montgomery, Loren MazzaCane Connors, and Charlambides - and each was a given a side to fill. Along with the three LPs was a 12x12, 32-page booklet featuring gorgeous artwork, velum dividers, and extensive liner notes about the artists. The box was issued in a one-time only edition of 3, 000 copies and quickly sold out; one can expect to pay hundreds of dollars on the used market or at an auction. Drunken Fish, the label that originally released it, felt that the music contained on this set was important enough to be on the market regardless of the package, and has issued a double CD of the music itself. They have offered listeners the opportunity to obtain the liner notes at least via a website or by sending an S.A.S.E. to them for inclusion - these are the notes only, not the booklet. All of the acts included here have one thing in common: their dependence on the electric guitar not only as an instrument that moves the notion of "song, " but as the basis for sonic and harmonic architectural exploration. These are, if for no reason other than their length, "jam" pieces. Bardo Pond's "Sangh Seriatim" quickly evidences this, beginning with a static bassline and understated percussion and opening onto a vocal sea where the singer's words are all but unintelligible and serve as a fill-in instrument. The guitars shimmer, shake, and feedback, crying the music, drone-like, through 22 minutes of soundscape (de)construction. Flying Saucer Attack follow suit with their four-part suite "Since When." the first section is merely white noise, feedback, and submerged loops lasting six minutes before opening onto long, single drone lines playing in overtonal layers that sound like a string section on stun. Using La Monte Young's "just intonation" as a base, a veritable army of guitars creates a multiphonic sea because of the tonal architecture. This increases in dynamic range as they hold and extend these passages, moving them only enough to create a microtonal impulse that gives way to the whole-tone system and it's resulting reverberations. More white noise inhabits section three for a mere two and a half minutes before the glorious finale begins, a two-chord pulse upon which sheets of feedback, drone, echo, and quartertone figures are built into a sea of dramatic musical noise. The other two standouts here - though none of this music is anything less than compelling - are by Montgomery and Connors. Montgomery's piece, "Fantasia on a Theme by Sandy Bull, " almost single-handedly reawakened interest in the late guitarist's career. Twenty-one minutes in length, it begins much like any Montgomery piece, with gently plucked chords draped in mystery, repetition, and layers of effects with spliced harmonic accompaniment via other guitars. Using a theme from Bull's seminal E Pluribus Unum album and an idea from Popol Vuh's soundtrack to Werner Herzog's film Aguirre, the Wrath of God, Montgomery literally tries to create a "harmony of the spheres" by extrapolating from those chords, roots, and triads that can be used to create tensions and feedback outside their original configurations, then under-girding via multi-tracking and tape bleed the original structure as the tempo increases. As the feedback and the trancelike "raga" come to inhabit the same territory, a tension gets created and builds until they move in and through each other, creating a new dissonant wall of sound. The exhilaration of the last five minutes alone, where the crashing sheets of sonic rock give way and become enveloped by the deafening yet gentle sea of layered chords and melodic lines, is devastating. "Fantasia on a Theme by Sandy Bull" was the first work in Montgomery's modern style, the sound that yielded the albums Allegory of Hearing.