Duke & the Drivers - Harder Than Before 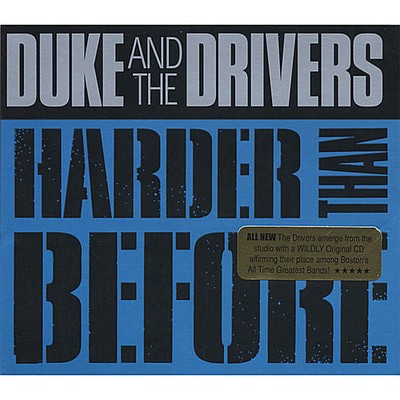 "Before there was The Blues Brothers, there was Duke and the Drivers" -Dean Johnson, Boston Herald DUKE AND THE DRIVERS has achieved legendary stature as one of the greatest New England party bands of all time. From their inception, the band has been known for explosive rock and roll, funky rhythm and blues, and their outrageous stage show featuring front men Sam Deluxe, Cadillac Jack, Mad Mississippi Buffalo, Earthquake Morton and Rhinestone Mudflaps III. Formed in the early days of Boston Rock and Roll and as a result of the Duke's inspirational training regimen, the DRIVERS honed their skills playing nearly every college and roadhouse throughout New England. They went on to sign with ABC records, where they recorded two albums featuring the singles "What You Got" and "Check Your Bucket". The DRIVERS have had the pleasure of working from coast to coast with the likes of: Aerosmith, B.B. King, Deep Purple, J. Geils, ZZ Top and the Eagles. They have garnered a devoted following of Duke fans which has continued to grow to this day. 'Harder Than Before' FACTOIDS 1. First studio album release since the 70's 2. All new material 3. All original material penned by Jo Lilly with a little help from the band, except the classic '60 Minute Man' the 50's tongue and cheek R&B hit from Billy Ward and the Dominoes. 4. 'Harder Than Before,' recorded in New York City, engineered and co-produced by Joe Blaney (Clash to the Ramones), and even a cameo on Funk All Over The Place by ESPN icon Chris Berman!Our special guest musicians include: Steve Jordan, Drums, Percussion (Chuck Berry to John Mayer) Dennis Mc Dermott (Boz Scaggs to Roseanne Cash) Neil Jason, Bass (Billy Joel to Paul McCartney) Bernie Worrell, Keyboards (Talking Heads to George Clinton) Kenny White, Piano, Vocals (Marc Cohn to Peter Wolf) Larry Campbell, Guitars (Bob Dylan to Buddy Guy) Bobby Keyes, Guitars (Jerry Lee Lewis to New Kids) The Uptown Horns (James Brown to the Rolling Stones) Clark Gayton, Tuba, Trombone (Bob Dylan to B.B. King) Richard Crooks, Drums (Howard Tate to The Mystics) Tony Garnier, Acoustic Bass (Bob Dylan to Buddy Guy) Charlie Giordano, Accordion (Bruce Springsteen to Pat Benatar) Bongo Bruno, Percussion Chris Berman, Courtesy of ESPN 5. Available only on CD Baby until it's street release in March 2007--tell your friends!!!!!

Here's what you say about
Duke & the Drivers - Harder Than Before.