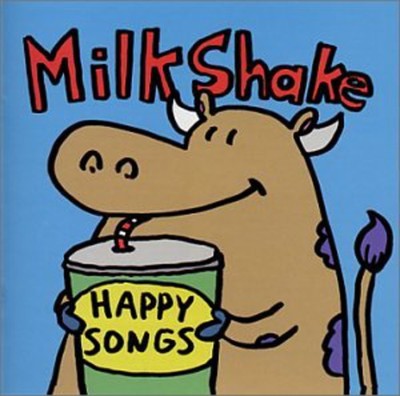 'Scared' featured on Noggin's 'Jack's Big Music Show' CHILD MAGAZINE'S 'Stand-Out CDs for 2002' 2003 Children's Music Web Awards: 'Best Recording for Preschoolers' and 'Best New Artist for Preschoolers.' iParenting Media's 2003 Great Holiday Product Awards: 'Best Children's Music Recording.' 'Kids-and their parents-won't have any trouble getting giddy over the 14 irrepressible originals in this rock-for-tots album. Sunny and bighearted, this one is a keeper.' Parenting Magazine, April 2003 Milkshake is the duo of Lisa Mathews and Mikel Gehl, both members of the popular rock group LOVE RiOT. After becoming new parents (Lisa has a daughter, Mikel a son), they found themselves thinking up songs to entertain their toddlers. The resulting recording features music as tuneful and alive as that found on the LOVE RiOT recordings (see the LOVE RiOT CD Baby page for more info), and indeed we think fans of the band will love many of the songs featured on Happy Songs. Contemporary, fun, educational and heartwarming, Milkshake's debut recording Happy Songs is a potpourri of activity songs, upbeat rock songs and lullabies released on Milkshake Music. Milkshake's original songs are based in the pop-rock genre, and influenced by both the years spent performing tuneful, melodic music in their rock band alter ego Love Riot, and the classic sounds of great groups like the Beatles. Both Mathews' and Gehl's songs have been featured on network television programs (NBC-TV's Providence, Homicide: Life on the Street, All My Children, Passions; ABC-TV's JAG, One Life To Live), MTV, the Oxygen Channel, Disney's ZGames 2000, and the Showtime Network. Their music is noted for it's multi-generational appeal, and the musicians have performed on such diverse venues as prime-time television, Lilith Fair and a mountain stage in Japan.

Here's what you say about
Milkshake - Happy Songs.