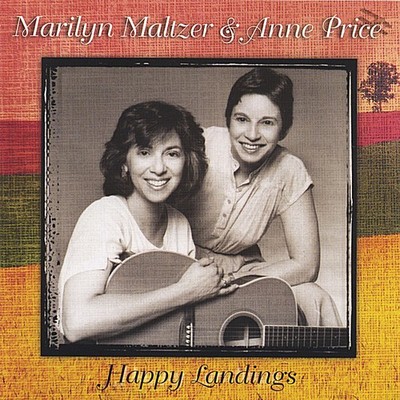 Anne Price and Marilyn Maltzer were singing partners from 1979 until Marilyn's death in 1994. Orginally recorded in 1989 for a cassette, Anne Price has now made this special album available for the first time on CD. Anne and Marilyn met at a New York Pinewoods Folk Music Club weekend and it was instant musical magic. The harmonies seemed to happen almost by themselves, and the blend of voices was perfect. They shared a love of traditional and contemporary folk songs of many varieties - Appalachian ballads, Irish and Scottish songs, Country songs, songs of the sea, cowboy songs, songs of love and overcoming adversity. This album includes a song each from songwriters Bill Staines, Rod MacDonald, Jean Ritchie, and Tom Paxton, two traditional Scottish ballads, an American traditional song, a French Canadian song, a country song from the early repertoire of Tanya Tucker and two other country songs, and a song written by Marilyn. Marilyn Maltzer lived in New York City, and later in Montclair New Jersey. Anne Price lives in New York City and has performed in venues such as The People's Voice Cafe and The Uptown Coffeehouse, has appeared on Joel Landy's Songs of Freedom show on New York cable TV, and on radio programs such as Woody's Children and Oscar Brand's Folksong Festival. She is also a long-time Executive Board member of the New York Pinewoods Folk Music Club. 'It's a spare, simple album, combining traditional and contemporary songs in open, acoustic arrangements with flawless strong duet singing throughout....the album wears well after repeated listenings.' Golden Link Newsletter, Rochester NY. Allen Hopkins.

Here's what you say about
Anne Price - Happy Landings.