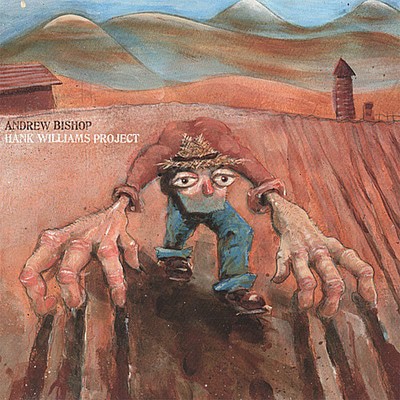 The Hank Williams Project was founded in 1997 by composer, saxophonist, and clarinetist Andrew Bishop along with Paul Elwood on banjo, Tim Flood on Bass, and Matt Wilson on drums. The group was expanded in 2002 to it's current configuration, which now includes Andrew Bishop (soprano and tenor saxophones, clarinet), Andy Kirshner (voice and soprano saxophone), Steve Trismen (violin), Katri Ervamaa (cello), Paul Elwood (banjo and percussion), Ryan Mackstaller (guitar), Tim Flood (bass), and Gerald Cleaver (drums). A virtual "dream team" of musical eclectics, the Hank Williams Project is devoted to breaking down the barriers of musical style and genre, notions of high and low art, and blurring the distinctions between composition and improvisation. Press Quotes Grade: A+ 'Hear that lonesome postmodern whippoorwill? Bishop makes it sound utterly natural to take liberties with the bard of the country highway. Bishop alternately plays Williams tunes (and originals inspired by him) for laughs and for angst; he jazzes things up and slows them down to Williams-haunted dirges.' -W. Kim Heron, MetroTimes, Detroit 'For his Williams project, [Bishop has] conceived a surrealistically rural sound world including banjo, guitar, cello, vocals, bass and drums...Here is a band that wraps it's progressivism in a product accessible to anyone from jazz geeks to, you know, normal people.'? -Mark Stryker, Detroit Free Press "Andrew Bishop's Hank Williams Project performed a set of truly original music unlike anything I have heard in recent years." -Michael G. Nastos, Cadence Magazine "[Bishop's] amazing Hank Williams Project combine[s] Nashville with downtown New York in a singular and idiosyncratic manner." -Piotr Michalowski, Ann Arbor Observer "A composer of contemporary orchestral and chamber music, Bishop combines a jazzman's fire and flow with a rigorous compositional sensibility, resulting in a potent and highly satisfying blend." -Dave Lynch, All Music Guide Liner Notes The concept for the Hank Williams Project was born at the Old Mill Wine Barn in Newton, Kansas in the early-1990's. Despite the club's reputation as an abode for jazz hipsters, it's clientele abruptly altered at midnight when the biker bar across the street closed. But instead of the expected hollers for 'Skynyrd!' as the club overflowed with Harley-Davidson t-shirts and wind beaten beards, the leather-clad group thoughtfully engaged in the music. One gentleman even asked me-in a decidedly sincere Kansas vernacular-if we ever played any Hank Williams tunes. A few weeks later I composed the "Hymn for Hank Williams." Years later and far from Kansas, I excavated the "Hymn" and started to explore the material in orchestral and electronic settings. The piece finally found it's true musical home in 1996 when the Hank Williams Project premiered at the Ann Arbor Edgefest, with me on saxophone, Paul Elwood on banjo, Tim Flood on bass, and Matt Wilson on drums. In 2002, the Project was expanded in order to explore a wider orchestral palette along with Hank's meaningful and enduring lyrics. This CD includes original compositions that elicit the moods and textures of Hank Williams (and other country music icons), arrangements of songs written and/or performed by Hank Williams, and (re)compositions of songs, ideas, and fragments from his music. The Project is also a metaphorical postcard from me to Kansas and the lonesome plains I adore and loathe simultaneously. Two decades, three bands, an orchestral work, and an electro-acoustic piece later, the project is brought to fruition on this disc. (Currently, there are no plans for a Lynyrd-Skynyrd Project.) Ensemble Bios Andrew Bishop is a composer, saxophonist, and clarinetist in diverse musical idioms. He has received recognition and awards from ASCAP, The Chicago Symphony Orchestra, the Hewlett-Melon Foundation, and a nomination from the American Academy of Arts and Letters. A sideman on over 30 recordings, his debut as a leader, Time and Imaginary Time (Envoi Recordings) features drummer Gerald Cleaver and bassist Tim Flood. Andy Kirshner is a composer, performer, writer, and media artist who creates music-theater Works. His compositions and performances have been recognized and funded by the National Endowment for the Arts, the Mary Flagler Cary Charitable Trust, Meet the Composer, the American Music Center, and the American Academy of Arts and Letters. Paul Elwood is a composer, banjo, and percussionist in diverse musical idioms and performs regularly in the realms of bluegrass, free improvisation, and new music. The Ann Arbor News described him as "astounding, turn[ing] his banjo every which way and loose." Ryan Mackstaller is a guitarist, composer, and improviser based in Brooklyn, NY. He is a member of Bottomed Out and leads his New York-based Median Trio featuring bassist Chris Lightcap and drummer Gerald Cleaver. Steve Trismen is a violinist based in North Carolina. He tours nationally and internationally performing in country, bluegrass, classical, jazz, and rock settings. Katri Ervamaa is a cellist who has performed widely in the US, as well as in her native Finland and throughout Europe. She is equally at ease with traditional and non-traditional music. Tim Flood is a bassist and composer who has performed with Uri Caine, Frank Lowe, Hank Roberts, Roswell Rudd, and many others. His original electronic compositions and mixed- media installations have been shown at venues such as The Detroit Institute of the Arts, Pauline Oliveros' Deep Listening Space, and the Sync '05 Digital Art Festival. Gerald Cleaver is a drummer who has performed with Muhal Richard Abrams, Ralph Alessi, Tim Berne, Kenny Burrell, Marilyn Crispell, Marty Ehrlich, Tommy Flanagan, Hank Jones, Henry Threadgill, and Reggie Workman. As a leader, Gerald Cleaver's Veil of Names recording Adjust (Fresh Sound New Talent), received a nomination for "debut record of the year" from the Jazz Journalists' Association.

Here's what you say about
Andrew Bishop - Hank Williams Project.