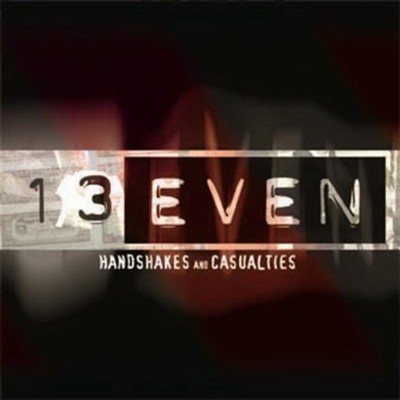 Ball crushing progressions...rude awakenings from a deep sleep...Sugar, and cream...PISS AND VINEGAR... good friends... die-hard support systems... underground networks.... yellow flowers splattered with blood...Fists that fly by...naked and drunk by the telephone... Independent... Amalgam... gnarled road kills on the back of the van...dry heaves.... where are we...a cup full of bile...a handful of heart.... a stamp of disapproval...a loving fuck you... We're taking over from here, if that's ok! Formed in 2001 and based in the suburbs of Philadelphia, PA. Has performed with OZZFEST 2004 (Philadephia), Marilyn Manson, Lamb of God, God Forbid, Machine Head, Trivium, Mushroomhead, Dope, Lost Prophets, 36CrazyFist, Hoobastank, Adema, Twisted Method, Unloco, Dry Kill Logic, Sinch, Darwin's Waiting Room, Tapping the Vein, Simon Says, Isle of Q, and Kings X. Winner OZZFEST BAND CAMP - 'Ultimate Battle of the Bands' contest by WYSP (94.1 Philadelphia) June 2004. 13EVEN's self-released debut album 'Handshakes & Casualties (released Oct. 2003) has sound scanned over 800 copies, and has sold over 1,000 copies to date in the Northeast region. Debuted in the 'top 50' in the Philadelphia market for album sales! Named WYSP (94.1 Philadelphia) 'Local Rock Stars of the Month' for December 2002. 'I think rock has finally caught up to where 13EVEN has been for a while now. Great songs and they can play them live. I think they'll be one of the next bands to make it out of Philly.' Spike,WYSP - Music Director. 13EVEN's official website launched August 2001, has received over 110,000 hits! Featured on WPLY (Y100) 'Y-Not' local show and the stations 'Top 8 at 8 Countdown.' '13EVEN is one of the most promising hard rock bands to come out of Philadelphia in a long time. Great musicians, great songs!' Jim McGuinn, WPLY-Program Director. Winner WMMR's (93.3 Philadelphia) 'Philly's Rock Idol' contest 2003. The band has been featured on the stations morning show & annual Spring Break Concert! 'Shackles' charted on Sirius Radio's 'Octane' channel December 2003. 13EVEN has received spins on Music Choice & DMX satellite radio, and on over 60 college stations nationwide. Sponsored by extreme clothing manufacturer 'Split' and 'RawkWear.' Featured articles/show reviews in the following print and on-line magazines 'Out on the Town', 'Origivation', 'City Paper', 'Technitions', 'SplitUSA.com', 'ExperienceMetal.com', 'Fuse.com', '411Mania.com', 'RockZone.com', 'PhillyBandZone.com', 'SouthOfMainstream.com', 'TheLioquitur.com'.

Here's what you say about
13 Even - Handshakes & Casualties.