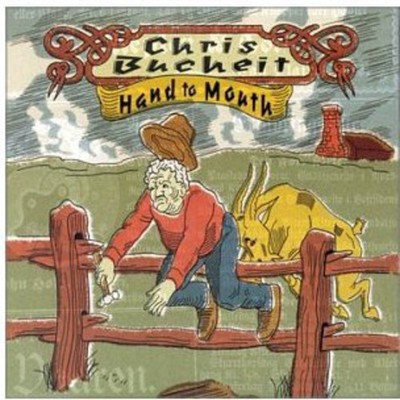 'Chris Bucheit plays fingerstyle guitar better than most mortals have a right to. He also writes inventive, thought-provoking songs and sings them in a clear, crisp tenor.' Performing Songwriter Magazine [Hand to Mouth won Acoustic Guitar Magazine's Homegrown CD Award for outstanding songwriting and production value.] Chris Bucheit (pronounced book-ITE) has been turning heads any where he has shown up with his guitar. He's the first to tell you his guitar technique was spawned from the musical streams of Leo Kottke, but he has found his own voice; blending Pop, Jazz, Folk and R & B into seamless and memorable compositions. His ability on guitar is matched by his vocal and songwriting skills. He is most comfortable with the label, 'Acoustic Jazz and Eclectic Pop.' 'I cut my teeth writing and singing pop music in bands for years. I consider this valuable training in the craft of songwriting as well as instrumental composing. When I finally found my way to acoustic fingerstyle, I started to discover my own voice on guitar. All my stylistic influences come together in my acoustic music. I've always been drawn to Folk, Pop, and Jazz but they all seemed mutually exclusive, until I found acoustic guitarists that were successfully blending all these styles.' Chris's debut CD Naive Work Songs showcased his extraordinary ability to weave memorable melodies through instrumental guitar. Fingerstyle Guitar Magazine says; 'Chris Bucheit brings us a delightful collection of pop and blues oriented pieces performed on 6 and 12-string guitars. No noodly fingerpicking here, just straight up guitar picking rendered with taste, sensitivity, and control.' Hand to Mouth was released in the summer of 1999 and showcases his strong vocal and songwriting talent while melding his fingerstyle technique throughout the CD. Hand to Mouth won Acoustic Guitar Magazine's Homegrown CD Award for outstanding songwriting and production value. The Chris Bucheit Group released 'Hard Disk Letters' in 2001. This CD marks the continued development of Chris's hybrid style. And the blending of Jazz, Rock and Pop. Beautiful Myth was released in the summer of 2003 and probably is Chris's most cohesive work so far. A bold production that presents both instrumental and vocal songs. This recording also highlights the talents of Josh Shively on drums and Neil Dreger on electric and upright bass. Chris's influences Include Pat Metheny, Leo Kottke, Peter Frampton, Joe Pass, Bela Fleck, Django Reinhardt, Sting, Elvis Costello, and Neil Finn.

Here's what you say about
Chris Bucheit - Hand to Mouth.