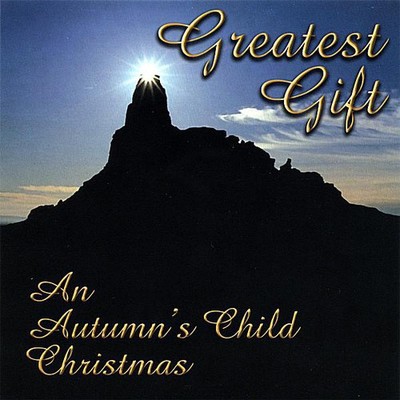 In early 2007, Cedar n Sage Music brought you a "Different Kind Of Real". Now Cedar n Sage Music is proud to present a "different kind of Christmas album"! 'Greatest Gift' is Autumn's Child at their best combining traditional songs of the season with some originals. A South American influenced version of, 'What Child Is This' followed by a most intriguing arrangement of 'O Come, O Come Emmanuel' with the ancient Armenian instrument the Duduk introducing the piece with Native American Flutes, Setar (a four stringed lute from Iran) a Daf, Persian frame drum and bass. The following piece is an original by Holland - the title track, 'Greatest Gift' featuring the Autumn's Child signature sound, with Native American Flutes and cello, with harp, guitar and percussion. Throughout this recording you find the use of world instruments mixed with the Native Flute - creating the Autumn's Child sound, 'global chamber music'. This is best identified in the title track, "Greatest Gift". "Bring A Torch Jeanette Isabella / Coventry Carol" features the Native Flute with Hammered Dulcimer. "God Rest Ye Merry Gentlemen" is an acoustic influence of Jethro Tull meets Mannheim Steamroller. Here is a listing of some of the instruments used on various tracks on this recording: Native American Flutes, Guitars, Cello, Harp, Bass, Piano, Pedal Steel Guitar, Hammered Dulcimer, Gourd Water Drum, Hang Drum, Udu, Darbukka, Doumbek, Duduk, Daf, Setar. From ChristmasReviews.com Like a chamber ensemble of world music, Autumn's Child constructs slightly exotic, yet well familiar, instrumental versions of holiday favorites and brand new offerings on Greatest Gift: An Autumn's Child Christmas. The group features the extremely talented Mark Holland, who mostly plays a lilting and throaty Native American Flute, an instrument that often breathes and emotes like a living thing. A diverse group of acoustic instruments from around the globe (doumbek, setar, gourd water drum, udu, duduk, dulcimer, etc.) create an overall effect that is upbeat, refreshing, and soothing. The album is split 50/50; half are traditional sacred carols, and half are largely Autumn's Child originals. The mix boosts the album's playability; you can run this release again and again without having holiday chestnuts beat you senseless. My favorite track is also the longest one (6:28); O Come, O Come Emmanuel develops slowly, with Holland playing a duduk (Armenian double reed instrument) solo. The haunting melody is initially not recognizable as the familiar carol, but by the time the setar (Persian 4-string lute) and daf (traditional Kurdish/Iranian frame drum) join the fun, Holland's duduk moves into the well-known theme. Music like this is great for those seeking background music that is something more unusual and organic than just instrumental guitar or classical chamber music. Very, very cool. Greatest Gift ends with the lovely We Will Exalt You; this track includes the only vocal (Hollie Brian), the final 'instrument' tossed into the mix. As the generous album (almost a full hour!) rolled to a close, I felt a flush of comfort and calm, just what I needed to begin my busy day in mid-November. Thank you, Autumn's Child! --Carol Swanson (Reviewed in 2007)