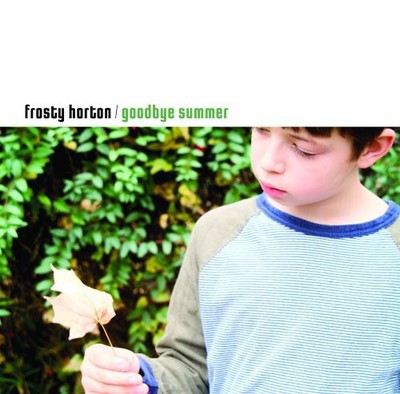 Known primarily as a producer of independent artists, Goodbye Summer is Frosty Horton's first CD project under his own name. "It was finally time. I'd always been a songwriter, but that side was rarely seen, as I was always more involved in the process of making recordings for others, who were most often songwriters themselves. Working with incredible singer/writers like Malcolm Holcombe, Shad Weathersby, David Bankston, and Jenn Adams has always been very rewarding. I love the personal; the emotional side of songwriting." He sites Paul Simon, Randy Newman, Brian Wilson, Joni Mitchell, Donald Fagan/Walter Becker (Steely Dan) and Andy Partridge (XTC) as major inspirations. "These folks are The Shit, both musically and lyrically. All present irony, humor, anger, joy, sadness, and occasional silliness, in brilliantly textured ways. The human condition in it's infinite variety, and it's all infinitely interesting." Frosty's love of music spills over musical genres. He co-wrote surf-punk instrumental 'Cecilia Ann' that leads off the Pixies' Bossa Nova and Best of Cds and received a Grammy nomination for his work on The Velveteen Rabbit featuring pianist George Winston and actress Meryl Streep. He's worked with and/or produced projects with his New Orleans hometown heroes Dr. John and Professor Longhair (Rock & Roll Gumbo), California homies Bobby McFerrin, Michael Hoppé and The Telling; Jazz keyboardists Mark Sloniker and Scott Fitzgerald and Indiana alt-rockers Arson Garden. Other than New Orleans' Jazz guitarist Phil deGruy's solo take on 'Imagine' following the John Lennon tribute 'December 1980', all the music and lyrics on Goodbye Summer were written by Frosty. "I didn't shy away from my feelings about war ('Here We Go Again') and matters of the spirit ('If I Believed in God'), but there is also frivolity ('Ain't That Love', 'Smellin' Like A Rose') and reflection ('You Told Me You Love Me', 'You'd Think I'd Know By Now'). All the songs on Goodbye Summer have meaning for me. God knows, there are enough CDs out there.'

Here's what you say about
Frosty Horton - Goodbye Summer.