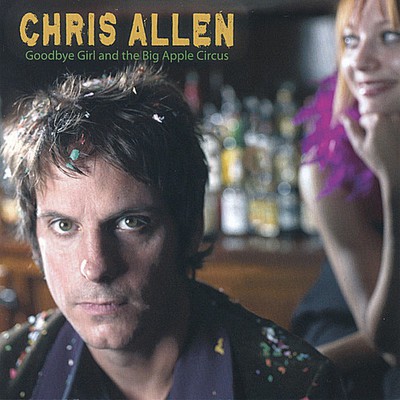 Chris Allen is the former lead singer, songwriter, heart and soul of the Cleveland-based band Rosavelt, who Paste Magazine calls a 'first-rate chronicler of life's minor ups and downs,' while the Cleveland Plain Dealer noted, '[Allen's] songs read like Raymond Carver short stories.' Voted Best Songwriter in Cleveland, OH (2006), he is currently playing dates from New York to Alaska in support of his first solo effort. Entitled Goodbye Girl and the Big Apple Circus (2007)(*), he once again enlisted legendary producer Don Dixon, and added to the mix Mitch Easter to record it as his Fidelitoreum Studios. Dixon and Easter are perhaps best known as the pair behind the boards on R.E.M.'s first two records, Murmur and Reckoning, and many others individually through the years, including James McMurtry, Marti Jones, The Smithereens, Let's Active, Ben Folds Five, Ken Stringfellow and more. Dixon also played bass, bringing with him long time cohort and seasoned road and studio drummer Jim Brock (John Mellencamp, John Hiatt, Marshall Crenshaw, James McMurtry, Joe Walsh) While Rosavelt received well-deserved comparisons to The Replacements, early Wilco and Exile on Main Street-era Stones, the new album combines the thoughtful songcraft of Tom Waits with the raw energy of Tom Petty. Cleveland Scene Magazine calls it 'a big jangly rocker reminiscent of Graham Parker's 'Mercury Poisining', but with his bar band soul...' Allen is an extraordinary songwriter whose gift lies in the subtle details and images he conjures. His rough-hewn voice is the perfect vehicle for laying bare the deep emotion, passion and drama of the characters who populate his songs. His new band brings together former Rosavelt bandmates Doug McKean on guitar and Tom Prebish on bass with Mark Stepro (of Red Wanting Blue) on drums and Chris Hanna on keyboards. *The Big Apple Circus is in no way affiliated with this album or it's creator Chris Allen, nor does it endorse or is it responsible for the lyrics contained therein.'*.

Here's what you say about
Chris Allen - Goodbye Girl & the Big Apple Circus.