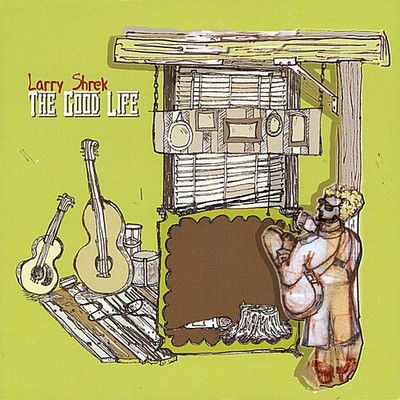 Larry Shrek (actually spelled Schroeck) has been a professional singer/songwriter since 1991. The product of a musical family, Larry was born in Georgia and spent his formative years in Florida and New Jersey. He scored his first singing gig at 10 years old, making $1.50 a week as a choir boy in southwest Florida. He started playing guitar in college and what began as a hobby soon became a necessity. He has since developed a contemporary folk style all his own, influenced by the myriad of sounds he grew up with, but clearly unique and straight from his soul. As his friend and fellow musician Tom Dean said, "His songs and the voice that sings them are honest, heartfelt and captivating. A true talent." After graduating from the University of Delaware with a biology degree, Larry aspired to be a professional golfer, figuring it might be a good way to make an honest living without actually working. It wasn\'t long, though, before he realized \'golf pro\' for a guy who couldn't break 70 meant selling clubs rather than swinging them. Frustrated and restless, he surrendered his golf slacks, picked up his guitar and headed for New York City in search of greener pastures. Performing began at a coffee house which quickly led to full time gigging and a musical migration from Florida to New England, playing taverns, tiki bars, restaurants, town centers, community fairs, parties, weddings, charity events, and other venues along the way. His shows feature his original material peppered with personally arranged cover tunes sung in a rich baritone voice and accompanied by standard, as well as baritone acoustic guitar. Currently based out of Kittery, Maine, Larry has released three full-length records: The Good Life (2008), Listen (2004), and Big Surprise (2000). Larry's also been featured on several CD compilations including the 2003 Seacoast Songwriters Vol. II, Wire_Radio Vol. 1 (2004), and the Oasis Acoustic Vol. 47 (2004).

Here's what you say about
Larry Shrek - Good Life.