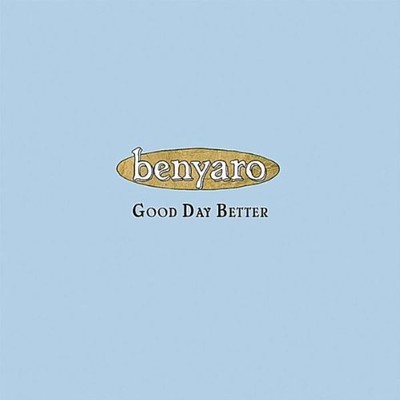 'Musser, McCullough and Chamberlin deliver the folk gospel according to Benyaro, a crunchy granola, campfire hoot of a sound endowed with warm tunes and tight harmonies, launching instant sing-alongs. As their new album promises, makes a 'Good Day Better.'' - Jonathan Takiff - music writer - Philadelphia Daily News (6/10) --------------------------------------------- 'an unsigned band with a self-released album that's cracked national charts? That's something...a sweet, soulful sound.' - Adam Rathe - music editor, New York Press (5/09) --------------------------------------------- 'Sounds like early-period acoustic David Bowie but with an Americana twang.' - Bryan Skowera - WESU 88.1 FM - Middletown, CT (4/10) --------------------------------------------- 'the album emanates a striking, authentic grace. Badass songs like the title track and 'Dogs' make me feel like doing brave things... You can hear in his voice the same soulful, raspy confidence that makes [Malcolm] Holcombe so appealing.' - Erika Fredrickson - A&E Editor - Missoula Independent (8/10) --------------------------------------------- 'An incredibly warm album, enveloping the listener in nostalgic reminiscense, like everything that made early Tom Waits so good. Inflections of '60s country-rock, trip-hop, and broken-beat minimal techno combine in surprising ways.' - Robert Parker - Music Director, KBGA 89.9 FM - Missoula, MT (4/10) --------------------------------------------- 'Acoustic soul-pop and folk come to mind on Benyaro's energetic sophomore release, Good Day Better, which displays Musser's unabashed, emotive vocal flights and a strong chemistry with Bobby McCullough' - Aaron Davis - music critic - Jackson Hole Weekly (7/10) --------------------------------------------- 'thoughtful acoustic music...Musser's voice is a strange amalgamation of Cat Stevens and Axl Rose, all quivery and emotive and gravely at once...[Musser's] throaty tenor dives right into the pseudo-scream without sacrificing a bit of clarity.' - Ryan Snyder - music editor, Yes! Weekly (Winston-Salem/Greensboro, 10/09) --------------------------------------------- 'Soulful acoustic phenomenon...' - Amy Matzke - music writer, The Roanoke Times (9/08) --------------------------------------------- The Story of 'Good Day Better' Brooklyn based acoustic roots/soul band, Benyaro, follows up it's self-released, self-titled, nationally charting (CMJ) debut album with "Good Day Better". The album will be released March 24 in New York City. Recorded in Charlottesville, Virginia and New York, New York in the brutal winter of 2010, "Good Day Better" features Ben Musser's strongest offering of original material to date and classic songs penned by Scott Claassen, Malcolm Holcombe and Diana Jones. "Good Day Better" unpredictably explores and expands the boundaries of acoustic music offering 12 tracks ranging from gospel, folk, country, rock, blues, and soul to beatboxing/house. The songs are inspired by family, places, pets, lovers and draw on the emotions that exist from engaging in such relationships. Such sentiments are unequivocally reflected in Musser's vocal performances which overflow with feeling while the beautiful, vulnerable, yet occasionally stern vocals of Meg Chamberlin perfectly offset the masculinity of Musser's and Bobby McCullough's voices. In a time when name dropping who worked on your record seems more important than the sounds and songs on it, "Good Day Better" was produced by Ben Musser, Benyaro founder, instrumentalist and primary writer, in a way that utilized the uniqueness of the group. For the first time the sounds and influences of upright bassist and back up vocalist, Bobby McCullough, can be heard adding to the sound that is Benyaro. The new collaboration between Musser and McCullough produced extraordinary arrangements and a multi-dimensional album with the potential of appealing to millions of listeners hungry for new music. The engineering of Jamal Millner, (Charlottesville area musician/producer) and Gar Ragland (New York City area producer/musician) helped to further create an environment of independence from formulaic approaches to making music. Tony Shimkin (Noble Music) and Musser mixed the album with the same principles in mind. In the end we are left with "Good Day Better", a truly independent album that makes a strong case for acoustic music in a period dominated by electric sounds, imitation and one-dimensional ideas. "Good Day Better" attempts to create music for today, contrary to numerous Brooklyn-based acts who are hoping to re-create music of the past. Genuine artists have a responsibility to move art, in this case, music, forward... and not backward to an era that is gone. Respecting listeners by offering them something new and unique while simultaneously treating them to touches of familiarity along the way was a constant concern and goal of Musser's. One can hear such ideals when listening through "Good Day Better." Team Clermont hears this. The selective independent radio promoters from Athens, Georgia who work with The Avett Brothers, Jenny Lewis, REM, David Byrne, Low Lows, Magnetic Fields, Rachel Yamagata, Punch Brothers, Tobias Froberg, etc., have already chosen to work with and help get "Good Day Better" to the listeners via radio. Please contact your local radio stations and ask them to play the album. Benyaro will release and support "Good Day Better" with a string of shows across the east and southeast this spring 2010. Soon after, the mid-west and west will receive the same treatment. Their live show is filled with singing and the same chances they take in the recording studio, though they replace the drummer (Musser) by assigning their limbs responsibilities of hihat (McCullough), shaker and kick drum (Musser), and sometimes tambourine (Chamberlin). Musser and McCullough will tour mostly as a duo as they did in 2009, closing for The Avett Brothers, sharing the stage with Samantha Crain and the Midnight Shivers, and opening for Jill Andrews of the Everybodyfields and Gregory Alan Isakov. It has been said you'll never hear as much sound come from 2 people as you will when you hear them perform together. Head out to one of Benyaro's many shows this spring and summer and listen to what people are talking about.

Here's what you say about
Benyaro - Good Day Better.