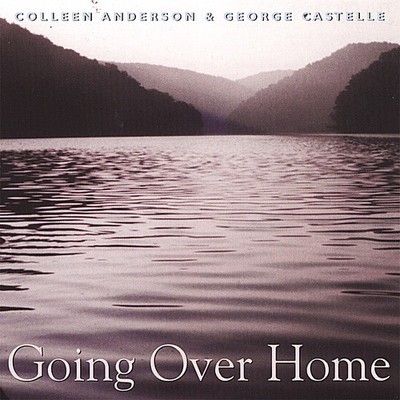 Guitarist George Castelle and I worked with our producer and friend Jim Martin for almost two years to produce this collection of songs. Most are my compositions, although we also included one Kate Wolf song ('Give Yourself to Love') and the traditional ballad from which we took the name of the album. Going Over Home was released in November 2001. Several of the songs in this collection have been featured on Public Radio International's internationally syndicated live music program 'Mountain Stage' as well as on 'The Folk Sampler.' The album includes guest performances by Bob Thompson, Jim Martin, Julie Adams, Charlotte Moellendick, Laura Harbert Allen, and some other good friends and great musicians. Here's what people are saying about Going Over Home: 'The interplay between Anderson's vocals and George Castelle's beautiful, sturdy guitar work has an intimacy and warmth not often captured on record.' - Michael Shannon Friedman, reviewer for The Charleston Gazette Colleen Anderson is the real thing. The depth and sensitivity in music are rare." - Roger Bryant, Real Country Magazine 'Your songs speak to my heart and I sing along with total abandon.' - Dorinda Wilson, MI 'I have my stereo set on 'repeat' because I want to listen to your music over and over.' - Beth Cahape, WA BIO INFO ABOUT COLLEEN: Colleen Anderson is a designer, performer, workshop leader, and writer. She owns Mother Wit Writing and Design, a creative studio in Charleston. She performs frequently with guitarist George Castelle and also with Julie Adams and Karen Vuranch. As a designer, Anderson has some 30 years of experience, including 17 years as designer of Goldenseal, the state's folklife magazine, for which she has also been a contributing writer. Her designs have won awards from West Virginia Communicators and the National Federation of Press Women. For more than 20 years, Anderson has led creative writing workshops in West Virginia, including many weeklong and eight-week workshops for teen and adult writers, respectively. With Julie Adams, she has led several workshops that concentrated on folk song and songwriting at Michigan State University. She and Adams are also co-leaders of an annual weeklong songwriting workshop at Ghost Ranch in Abiquiu, New Mexico. Anderson's songs have been featured on Public Radio International's Mountain Stage and The Folk Sampler, and she has produced two albums of original songs, Fabulous Realities (1991) and Going Over Home (2001). Her song "West Virginia Chose Me" is included in several anthology recordings of West Virginia music, and two others have won the FOOTMAD songwriting contest and qualified for the semi-finals in the Mountain Stage NewSong performing songwriter competition. Anderson's other published and/or broadcast writing includes a decade of editorial copywriting for the state's official travel guide, West Virginia Wild & Wonderful (honored as the Best State Travel Guide in 2005); restaurant reviews for Mid-Atlantic Country Magazine; more than 100 essays for West Virginia Public Radio, two of which won national awards; and dozens of short stories and poems, including publications in Redbook, Arts & Letters, Kestrel, Antietam Review, and others. Her article "A Pawpaw Primer" has been chosen for inclusion in Cornbread Nation III: The Best of Southern Food Writing. Anderson's writing has earned two $3,500 artist fellowships from the West Virginia Commission on the Arts (1994, playwriting, and 2000, nonfiction). She received a residency fellowship from the Helene Wurlitzer Foundation artists' retreat in Taos, NM in 2007. BIO INFO ABOUT GEORGE: George Castelle has been performing guitar and piano in a variety of settings since the mid-1960's. When not performing with Colleen, George is the Chief Public Defender in Charleston, West Virginia, and has been an adjunct lecturer at the West Virginia University College of Law. In recent years he received national recognition for exposing crime lab fraud and freeing innocent prisoners wrongfully convicted by false scientific data. His work has been featured on 60 Minutes, Dateline, 48 Hours, and Court TV.

Here's what you say about
Priscilla Andersohn - Going Over Home.