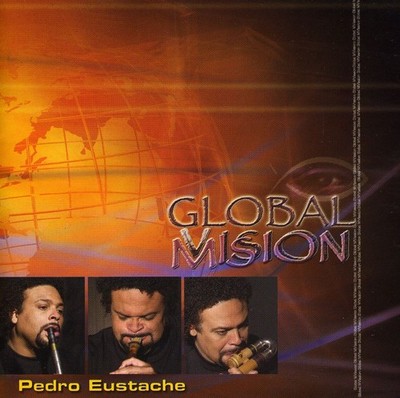 Pedro Eustache - Bio Venezuelan-born Pedro Eustache is an openly creative solo flautist-"World-Music" woodwinds-reeds-synthesist-composer, with a unique, richly eclectic, multi-directional personal voice. His musical language is the direct result of years of both solid studies and professional experience in the classical-European, Jazz, World-Music, Popular, and Computer/Electronic music art forms. He graduated from two European conservatories in classical music, has a M.F.A. in Jazz in the USA, & has studied world music disciplines with some of the greatest masters, including India's living legend Pandit. Ravi Shankar & matchless bansuri master Pandit Hariprasad Chaurasia, as well as Armenian duduk w/maestro Djivan Gasparian, and to name but a few. Mr. Eustache's professional activities go from solo western classical recitals, to more than seven years of symphonic experience, to jazz concerts, pop, world music [traditional & cross-over], in tours, live performances, recordings & lecturing. He is the main world-winds instrumentalist in John Debney's soundtrack for Mel Gibson's "The Passion of the Christ" movie [nominated for best film-music for the 2005 Oscars]. He was a featured soloist in the '05 Grammy-award winner "Concert For George", playing for the first time ever the Armenian duduk in a traditional Indian classical music setting, as a member of India's living legend, & his teacher, Pndt. Ravi Shankar (Pedro is his only latin-American disciple). For more than 10 years he has been the featured winds soloist with new-age super-star Yanni, and has performed, recorded, &/or toured with many others, like latin-rock super star Shakira, virtuoso composer/flautist James Newton Jr., rock star Don Henley, Persian diva Googoosh, & Latin extraordinary Alex Acuña, among many others. Pedro is the main world winds soloist featured in many movie soundtracks, including Steven Spielberg's film 'Munich' w/film music composer legend, John Williams; Peter Jackson's "King Kong" w/James Newton Howard (also in 'The Interpreter', 'The Village', 'Hidalgo'); as well as in Warner Bros. "Syriana" w/Alexandre Desplat (& Djivan Gasparian!), as well as in the first Hollywood-Bollywood co-production "Marigold", w/Graeme Revell. Other film, TV & Video Games soundtrack recordings include: maestro Michel Colombier† ('Largo Winch'), Danny Elfman ('The Hulk'), Tim Truman ('Jeremiah'), Russell Brower (Blizzard Entertainment's 'World of Warcraft®'), and most recently he is the featured world winds soloist in"Pirates of the Caribbean 3" with Hans Zimmer, among many others. He is featured in two songs-including a duet-with the ex-Beatle, Sir Paul McCartney, in his latest, fall '05, "Chaos & Creation in the Backyard" & "Growing Up, Falling Down" single CDs. With a collection of around 500 instruments from all over the world --many of which uniquely custom designed & built by himself-- he holds a unique position in the international performing & recordings studio scenes, being first in demand for many solo artists, & producers, film & TV sound-track composers. Mr. Eustache's performances are full of tremendous uplifting synergy, which seem to contrast with the tragedy he & his wife Sara suffered years ago, when loosing their three-year-old daughter-Ginette Esther- to brain cancer. Pedro publicly thanks the Almighty for his gifts, & dedicates his art to 'The One' Who validates the purpose of his existence: to "The Father of Lights", source of all.