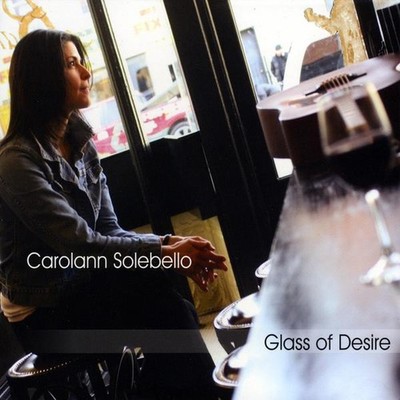 Although she is most familiar to folk audiences as a founding member of the female trio RED MOLLY, Carolann began her musical journey as a solo performer. In the late 1990s, she abandoned a comfortable theatrical career and leapt headlong into the teeming pool of singer-songwriters in her hometown of New York City. Armed with a powerful voice and percussive guitar style, she soon found herself swimming in the downtown club scene, recording her first solo album, Just Across the Water (2000), and establishing her own independent label, Elizabeth Records, to release it. In very short order, the soloist became one-fourth of a quartet, power folk group CC RAILROAD - and later, one-third of a trio, RED MOLLY - and Elizabeth Records grew from a vanity project to a vibrant collective boasting six artists and nine releases. Nine years after the birth of the label, the founder of Elizabeth Records returned to the fold to release her second solo album, the tenth under it's umbrella, Glass of Desire. "When I asked Fred Gillen, Jr. to produce this record, I knew I wanted something very spare," Solebello explains. "After recording two full-length discs each with CC Railroad and Red Molly, I was eager to see whether my songs could stand on their own without benefit of the thick four-part and three-part harmonies, respectively, that have defined my musical experience for the better part of a decade. I wanted to know whether or not I could still cut it alone." The finished product, Glass of Desire, features eleven songs written and sung by Carolann Solebello, accompanied primarily by her own acoustic guitar. Sideman extraordinaire Steve Kirkman adds tasty, yet elegant, Dobro, lap steel, electric guitar, and National steel guitar. Matt Turk and Producer Fred Gillen, Jr. contribute mandolin and electric baritone guitar, respectively. "A great deal has happened since I recorded Just Across the Water," Solebello says, "in my own life and in the world at large - two bands, one marriage, two wars, one child - so I suppose Glass of Desire is a hard look into my own spiritual rear-view mirror. There's more in the frame than is evident at first glance, and objects are often much closer than they appear."

Here's what you say about
Carolann Solebello - Glass of Desire.