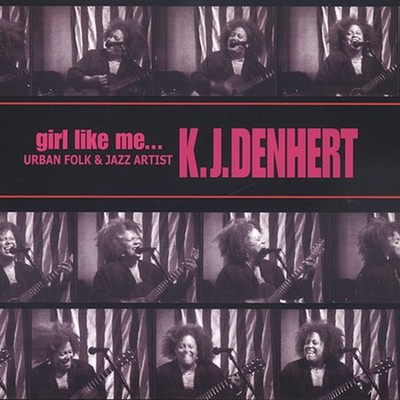 When you see Kj Denhert perform you will be drawn in by her artistry as a singer and as a fine guitarist. Each musical set is a tight mix of rhythm, wit, and passion. For KJ, there is only one adventure more fulfilling than songwriting and that adventure unfolds on the stage. Her songs are a calling card, always unique and then familiar. It is the honesty of her performance and the love of what she is doing on stage that will move you. She is an experienced bandleader who plays without a net, and that makes her fun to watch. New York native, KJ calls her music Urban Folk and Jazz though it is rooted in Funk and R & B. 'The Jazz', she explains, 'comes from people's perceptions of my guitar voicings and the structure of the tunes themselves... using extended solos and the players working off of each other. Urban reflects my childhood, growing up in NYC, and Folk, I really adored James Taylor, my first guitar influence, and I use acoustic guitar in my songwriting and live shows, as opposed to many years touring as a lead guitarist.' KJ and her Band the NY Unit perform in such legendary rooms as The Bitter End, The Bottom Line, The Fez, the Living Room, and plays regularly to 'standing room only' crowds at The 55 Bar in NY's West Village. KJ continues to receive very positive responses wherever she appears, resulting in new and exciting opportunities. In the last six months, KJ was invited to open for Roberta Flack, spent three weeks performing in St. Barts in the French West Indes, and headlined at the Blue Note, Las Vegas from April 8-13, 2002. Between appearances, KJ finds time to lend her support to many charitable organizations. She supports efforts to raise money for Aids and Cancer research, and appears annually in the PNW Women's Resource Center telethon. She provides live 'on-site' concerts for hospitalized HIV patients through Lifebeat, Inc. (Aids Awareness Organization NYC). KJ also appears on compilation albums such as the 'The Ovarian Cancer Research Fund Album' (Mod Music, NYC)(1999) and 'Brooklyn Above Ground'(2001), in support of World Hunger Year. KJ resides in Westchester NY and states her goals are simple. As an independent record label owner and founder of Mother Cyclone Records, she says, 'I want to grow my label and just keep writing'. She dedicates her life mostly to music and explains her passion, 'I get to do what I really love and I'm very careful about the quality of what I write, release and perform. I've lived the truth of the slow build as a marketing strategy. I'm a dot.com now and I just keep working hard at putting out the best product I can, whether we're playing live or in the studio'. Having spent seven years on the road as a lead guitarist, touring the US, Asia and Europe, KJ shares, 'I think we're completely ready to break some new cities in the US now. Then, I'd really love to get back to Europe with my material ... It's finally coming together and I'm having more fun than ever!'

Here's what you say about
K.J. Denhert - Girl Like Me.