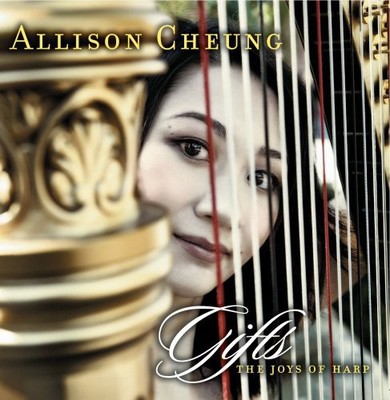 Allison Cheung began her musical studies at the age of three on the piano, studying with numerous teachers including Dr. Lawrence Ferrara, head of the Music Department at New York University. Ms. Cheung began the harp at the age of eight with Merynda Adams of Madison, NJ. In 1998, she was admitted to the Juilliard Pre-College program where she studied harp with Nancy Allen and composition with Dr. Andrew Thomas. She continued her harp studies while she was a student at Princeton University, studying with Elaine Christy, and also with Catherine Michel, in Paris, France. In 2006, she received a Fulbright Scholarship to France where she trained with Isabelle Perrin at L'École Normale de Musique de Paris. Ms. Cheung is a recipient of numerous awards including The National Foundation for the Advancement in the Arts, The Juilliard School Honorary Scholarship, and the New Jersey Governor's Award in the Arts. She was a winner of the Advanced Division of the American Harp Society National Competition in 2003. Ms. Cheung has performed as a solo and orchestral harpist around the US and Europe. She has presented in prestigious venues including Carnegie Hall, Alice Tully Hall, The Juilliard School, Princeton University, the American Church in Paris, France, and Oxford University. Ms. Cheung has appeared in several music festivals, most notably, the Aspen Music Festival in Colorado, l'Académie-Festival des Arcs in France, and the Bowdoin Music Festival in Maine. Ms. Cheung received a Bachelor of Arts degree in Music and certificate in Musical Performance from Princeton University, a Masters of Studies degree in Musicology from Oxford University, and a Juris Doctor degree and certificate in entertainment law from the University of Southern California Gould School of Law.

Here's what you say about
Allison Cheung - Gifts-The Joys of Harp.