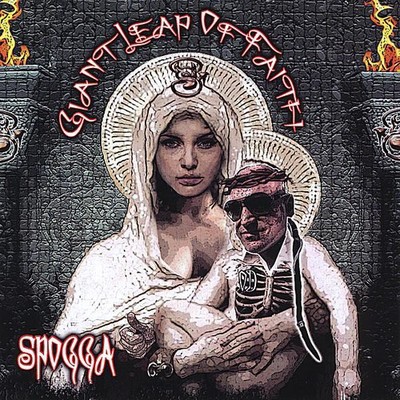 Spogga [what his performance is like] The initial thing anyone needs to know about Spogga and what makes him so unique is his live performance. Spogga is a live-music artist. He performs in front of a crowd at least three times a week at a wide variety of venues, mostly in the Northeastern United States. The hardest thing to describe about Spogga is his style. Most people in the industry know that an artist without style is not only hard to market, but also has no real direction, let alone a strong sound. This is not the case with Spogga. He once told me that Bruce Lee, one of the greatest martial artists of our time, developed the "Style of No Style." He simply could not be defeated. Ever. Spogga also told me that Bruce Lee could kick my ass (and yours, too, for that matter). Let's look at the week of March 8th, 2008, a "normal" week for Spogga. His first performance was at RiRa, an Irish Pub catering to business professionals and college students from Brown University, Providence College, Johnson & Wales, and the Rhode Island School of Design. The music was great and the room was packed. Show after show, week after week, Spogga refills the venues at which he performs with regulars, fans, and their friends, all eager for a taste of the Spogga Experience. The evening after RiRa was spent performing at the Sullivan Room in New York City. Serge, the owner, had booked Spogga for their 5th anniversary show and often hires Spogga for special events that draw large crowds. As always, Spogga's ability to mimic a DJ's sound in his live act amazed the crowd and thrilled the owners of this underground electronica venue. After performing his own show, Spogga spent the remainder of the night improvising over a number of two hour DJ sets. It's difficult to describe how he does this or generates his own independent sound, but I'll try anyway. Spogga beats the crap out of his guitars. Literally. At any moment you'll see him smack out a bass line or record a beat by whacking the pick-ups or shouting into the body of his guitar. Listen to the track "Little Baby Hannah" and you'll hear what appears to be DJ scratching after the guitar solo. But it's no DJ scratching; it's Spogga rubbing his fingers against the lower two strings of his guitar like he is playing his best girl's...ahem...nevermind. Spogga's third performance of the week was at Naima, at 29th and 10th in Manhattan, NYC. It's an elegant Italian restaurant that transforms into a stylish club around midnight After a jazz/hip-hop early evening set that included a number of re-mixed and thoroughly Spoggafied popular tunes, Spogga heated things up by singing into his guitar, sampling it as a full-fledged vocal harmony, and playing his guitar's low string with a violin bow while working an array of effects pedals with his toes. Being the first show Spogga did at Naima, the crowd and the owners really didn't know what to expect. When Alessandro, Naima's owner, saw that the majority of his early night dinner guests stayed all night long to see the show, he went so far as to ask Spogga to do a residency at his venue come spring. Not bad for a first show. Everyone was happy! Sunday night saw Spogga perform the Sunday Night Love Bite Chicken Fight at Shorebreak in Narragansett, Rhode Island, close to the land of his birth. The club is near the University of Rhode Island and week after week, students fully immerse themselves in the Spogga Experience, requesting songs all night long, singing along with his original work like a horde of drunken sailors and dancing until they pass out or last call, whichever comes first. Spogga drives the crowd forward with mash-ups of 50 Cent, Jay Z, Sublime, Dave Matthews, Bon Jovi, Metallica, etc., mixing favorites with not-so-favorites and tripping everyone out with his combination of beats and brilliant synthesis of wildly different genres. Enough. By now, it's obvious that Spogga is unstoppable. Audiences love him, club owners, too. He roars his way through his show, never rushing, never stopping, giving me, at least, the impression that he's playing for his soul and no one at all. So why isn't he HUGE? Damned if I know. That's what we're trying to change, though, right? In the end it is inevitable that God and the Devil will kiss and become lovers under their common appreciation of Spogga, and the world will be a better place for all of human kind. I say this unto you, in peace. Amen! P.S. Did I mention that Spogga brought fire dancing to the East Coast and has been performing Providence Waterfire for the last seven years? No? Well, that's another subject altogether. Never mind for now.

Here's what you say about
Spogga - Giant Leap of Faith.