The Rudds - Get the Femuline Hang on 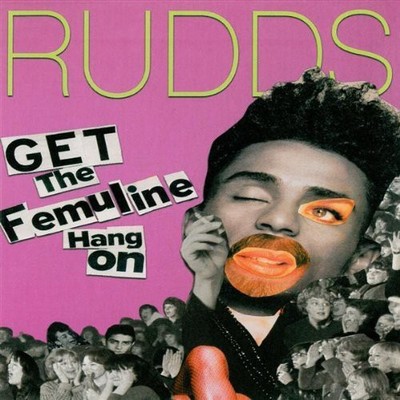 Explaining The Rudds is easy. Leader John Powhida is an amazing singer and songwriter emotionally and technically. He writes and sings emphatic hits drawn from a musicality that runs from Prince to Cheap Trick with Frank Zappa hovering somewhere in between. The kinetic performances and production on their latest album, Get the Femuline Hang On, is the product of numerous leaders from Boston's underground rock-and-roll scene of the last ten years: Co-producer and bassist Tony Goddess led Papas Fritas to indie success for the latter half of the nineties and has racked up songwriting and production credits ranging from Guster to Sunburned Hand of the Man in the years since they disbanded. Brett Rosenberg, The Rudds' lead guitarist, fronts his own band, the perfectly termed Brett Rosenberg Problem, earning local and national raves from the Boston Phoenix and the All Music Guide. Earlier this year Rosenberg was handpicked for the lead guitar slot on Graham Parker's U.S. tour. Chanteuse Andrea Gillis has led her own blues-based bands around Boston for the last five years while running the Abbey Lounge, establishing it as the city's premier garage rock venue, booking rock and roll acts from local Bomp recording artists the Konks and the Coffin Lids to nationals Sylvain Sylvain and The Lazy Cowgirls. Drummer Nathan Logus toured for years in Thirsty Ear recording artists Baby Ray, before finding a more tenable musical existence as a ringer for the local studios. Finally, keyboardist Dave Lieb, an in demand multi-instrumentalist, can proffer up any style of music you care to name on the instrument of your choice. That brings us back to John Powhida. He's from Albany. He works as a security guard at the Museum of Fine Arts. He moved to Boston five years ago and immediately put together the first incarnation of The Rudds. Their self-titled debut release, produced by the Figgs' Mike Gent, earned raves from Boston based, nationally published music writer/novelist Brett Milano who awarded the band top honors in his year-end list for 2003: "John Powhida is a wizard and very nearly a true star." Established local headliners, The Rudds are riding their sophomore release Get the Femuline Hang On as it continues to receive brilliant reviews from the likes of the Boston Phoenix, PopMatters, Time Out NY and Tiny Mix Tapes. The record was mixed by legendary production team Paul Q. Kolderie and Sean Slade, features guest performances from Brian Wilson band member Probyn Gregory, Columbia/Aware recording artist Bleu, and has caught the ear of other notable artists from John Oates to Camille Paglia. With a live rock-and-soul revue that garners equally ecstatic endorsements, and a drive to bring their unique Femuline (masculine AND feminine) sound to the masses, The Rudds are ready to put on a show in your town.

Here's what you say about
The Rudds - Get the Femuline Hang on.