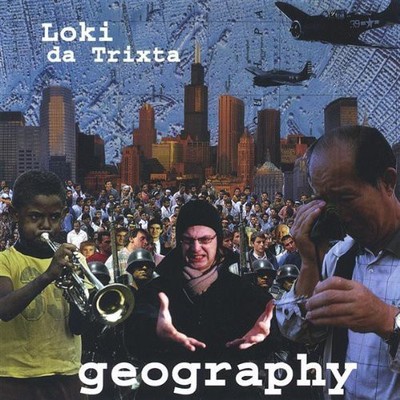 In 2003, fresh off his appearance in the underground documentary 'In a World by Myself', a virtually unknown emcee exploded onto the indie hip hop scene with his debut 'Mythology'. A harmonious blend of acid jazz and innovative social commentary, Loki Da Trixta established himself as one of the premiere thinkers of his generation. Ambitious yet smooth, thought provoking while plausible, 'Mythology' spawned the smash 'Who's Next' (produced by Buffalo beatmaster Tone @las) and let it be known that the new breed of intelligent hip hop's chief practitioner was a Brooklyn thoroughbred named Loki Da Trixta. Two years later, with a critically acclaimed debut, countless guest features and numerous stage shows under his belt, Loki is back with 'Geography' a bigger and badder arsenal of beats, rhymes, and metaphors. Teaming up with the ever-dynamic duo of Duane Wizzard and Mike Spice (Cypher Productions) as well as beat makers Tone @las, Ill Tone, and Pastime, Loki has returned with what is already one of the most critically anticipated and internationally satisfying albums of the year. 'Geography' selects musical compositions that reflect Loki's steady growth in the years since his last solo album. 'People were really feeling my first project' the proud emcee offers,' but this time I wanted to not only show a deeper side of who I am, but also show the world where I've been in the last two years.' 'The new album has a broader perspective than the last one. Since the last album, I've been fortunate enough to travel all over the world, or at least 2/3 of the world. I learned a lot about different cultures, their different ideologies, and how much the world truly embraces hip hop. I wanted this album to represent for the hip hop community and the world community as a whole.' Indeed, 'Geography' does just that. Executive producing the project himself, Loki spent the last year and a half writing and co-writing songs for his sophomore effort, drawing mostly from personal experiences and world travels. The album boasts a collection of bilingual bangers that feature da Trixta freaking flows in bodega Spanish, 'Spanglish' featuring Oktober, and French/Creole, 'Pret' featuring Adlibbeur and Saga One. Loki also extends his microphone to the continent of Africa with the stirring 'Africa II' which features persistent percussion laced with tribal guitar sampling. As for those looking for the good old fashioned American bred lyrical pugilism there's the militant bounce of 'USA' as well as the lead single and Saturday morning cartoon classic 'High Five'. 'Geography' captures the international spirit of modern hip hop, and puts it in a bottle for today's audience. It is a diverse record with something to appeal to everyone from the seasoned hip hop heads, to indie rockers, to teenie boppers. Look to hear a lot more from da Trixta in the future.

Here's what you say about
Loki Da Trixta - Geography.