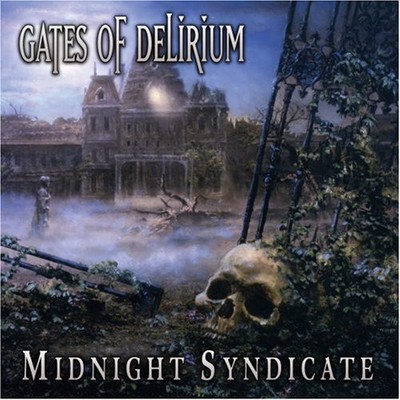 They have taken you deep into the crypts of a forbidden castle and to the edge of the sea among the ruins of a cursed village . . . Now the masters of gothic/horror soundscape invite you to take a musical journey into the macabre world of Haverghast Asylum. Your horse and carriage awaits you . . . Gates of Delirium marks the band's fourth album in as many years. During that time, Midnight Syndicate has pushed the boundaries of the gothic and classical crossover music genres. Their unique blending of dark, classical orchestration and sound effects has allowed Midnight Syndicate to establish a devoted following of gothic, horror film/music, and Halloween aficionados worldwide. Since it's inception, Midnight Syndicate's goal has been to create music that stimulates listeners' imaginations, transporting them to worlds and movies of their own creation. Set in a nightmarish, turn-of-the-century asylum, and featuring some of the band's most advanced production to date, Gates of Delirium promises to do just that. REVIEW - LEGENDS MAGAZINE - by : Mike Ventarola A lone scream pierces the night...Dark shadows envelope unwilling guests of a wretched stronghold that harbors an unspeakable terror.... Welcome to Haverghast Asylum;' so echoes the dire back cover warning as we foray through the latest offering of sonic enticement of diabolical and abject terror. Midnight Syndicate continues to offer soundscapes best described as cinema of the mind. Haverghast Asylum is the imaginary setting for this latest outing, which comprises macabre music intertwined with the unrestful haunting of the criminally insane from another era. We are mute witnesses to an auditory excursion through the foulest depths of a man-made purgatory. Far worse than the unsettled dead patients, who endured unspeakable horrors and torture, are the eternally damned souls of their tormentors who have accompanied our phantom residents into this hellish abyss. The disc opens very dramatically, not unlike some of today's tension building music often included in contemporary horror films. We are taken back in time as gentle chimes and urgently tense violins accompany a horse drawn carriage. An anonymous passenger is heard departing from the carriage and entering Haverghast Asylum. He is unnerved as he passes the crammed, vile cells overflowing with filthy inhabitants. Flailing arms protrude from their imprisonment, begging for liberation from this life, each voice screaming louder over the din than the next. The doors slam tightly behind him, bolting him within, leaving him with no means of escape. Futile attempts to exit causes our visitor to comprehend that he has been thrust into the depths of depravity. This eventual realization has our protagonist frantic and running through the hallways and tunnels seeking a means of escape, however, he is unaware that his soul is doomed to wander and witness the wretched and unspeakable acts perpetrated throughout this institution of horror. Soon, his awareness will also alert him to the fact that a final egress from this life or the hell to follow is also unattainable. He barely catches his breath in a dark and isolated tunnel when he becomes cognizant of even more horrid sounds. This cacophony is even more pained than the wails and anguished screams from the cubicles that he just passed. Despite his fear, curiosity begs him forward, drawing him towards an archaic laboratory, which discloses acts of experimentation, mutilation and bodily violation on a grandiose scale. He questions his sanity as he tries to differentiate if these are echoed phantom images of the past or a present day abomination. Gates of Delirium, like the previous release Realm of Shadows*, utilizes a bit of a story model to guide the imagination. The genius behind this mental cinema is the proclivity to employ sound as the narrative. Unlike those who score soundtracks for films, Midnight Syndicate does not have film footage to guide the listener. Instead, this work takes sound to steer the listener towards images lurking within the confines of your mind. Surpassing the macabre, it seems this duo also went for a composite of the ghastly and bittersweet as evidenced in the track Residents Past. One can almost see the faded photographs of the departed, each note yielding an entire volume of their life before Haverghast consumed them body and soul. The lives of the inhabitants are demarcated, giving rise to a well-rounded profile of their life prior to their admittance. Music that underscores this contemplation builds and turns, frequently causing the hair on our head to stand up, as we come face to face with ghastly apparitions and wretched evil. Midnight Syndicate artfully uses only a minimal of sound effects to carry a story line along, but leaves just enough space for the mental movie to change with each listening. Unlike other horror movie soundtracks, this duo somehow manages to find just the right tones and notes that seems to stimulate the deepest recesses of one's imagination. It is almost as if some magical charm is unleashed with each note, causing the surroundings to take on a 4th and 5th dimensional element. This creates such vivid and splendidly colored perceptions, which is as lifelike as a painting on canvas yet as liquid and volatile as quantum physics. With full bombastic orchestrations that deigns to be on the forefront of a new style of entertainment, one must conclude that no one has been able to provide horror entertainment quite like this. This CD could best be described as Graeme Revelle meets Danny Elfman with Dario Dargento as the conductor. For those who are avid readers, there is no doubt that the works of Midnight Syndicate will enthrall you beyond your darkest reverie. Allow your imagination to run a while with the dark and depraved ghouls that shriek through the halls of Haverghast Asylum. If one is an ardent fan of horror movie soundtracks, then you owe it to yourself to become enmeshed with the style of Midnight Syndicate, who leave the competitors in the dust.

Here's what you say about
Midnight Syndicate - Gates of Delirium.