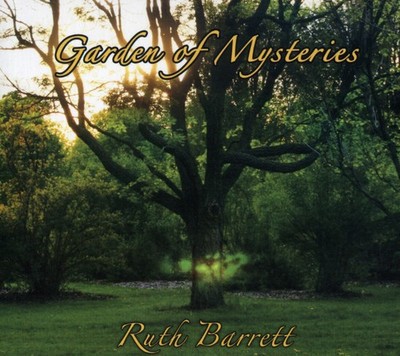 Ruth Barrett is an internationally known fretted dulcimer recording artist, singer, and songwriter and award winning recording artist of original Goddess songs. Her numerous recordings beginning in 1980 have been among the pioneering musical works in the Goddess Spirituality Movement. Ruth's classical finger picking style of dulcimer playing, combined with a powerful and beautiful voice, has enchanted audiences for almost three decades. She is known for her original folk music inspired by folklore, goddess mythology, celebration of nature, as well as for her arrangements of traditional Celtic and English folk music. "Ruth has just released her tenth CD, Garden of Mysteries showcases Ruth's excellent finger-picking dulcimer style and her powerful, beautiful voice. Listening to each song is akin to picking up a series of beautiful objects, each begging for your rapt attention. As you begin to really appreciate the wonder and promise of the object you're holding, it fades only to be replaced by a new and equally mysterious subject for your careful examination. Each object is a differing facet of a very cohesive whole, and the listening experience is as restful and thought provoking as an actual trip to a real garden. Ruth's original compositions site nicely alongside songs from Robin Williamson, Mark Simos, Les Barker, Lorraine Lee Hammond, and others. There is a definite but mystical bond at work, and I'd be surprised if you didn't feel it too." - reviewed by Neal Walters for Dulcimer Players News, Summer 2008 SAGEWOMAN MAGAZINE, January 2011 Garden of Mysteries by Ruth Barrett "The name Ruth Barrett might be familiar to many Sagewoman readers. The author of the critically acclaimed Women's Rites, Women's Mysteries: Intuitive Ritual Creation (Llewellyn, 2207) has been prominent in both the international women's music and pagan music scene for a number of years, performing at many pagan and woman-centered gatherings and festivals. Her latest CD is a magickal collection of songs both traditional and original, blending Barrett's famous, angelic fretted dulcimer with her earthy, powerful voice. It's a beautiful combination. Barrett's contributions to pagan music are numerous. She is included in compilations such as 'Songs of Witchcraft and Magic' (produced by the Museum of Witchcraft in Boscastle, Cornwall) and 'The Best of Pagan Song.' In her solo work, and in duets with Cyntia Smith, the sacred feminine and a joyful earth-consciousness shine through in such works as 'The Year is a Dancing Woman' and 'Invocation to Free Women'. In 'Garden of Mysteries', these favorites themes and images abound. In 'Quiet Mist of Morning' Barrett takes us through the Wheel of the Year as perceived through the eyes of an enchanted maiden. In the title cut, she makes a poignant statement about the nature faith and being true to oneself. 'Garden of Mysteries' spans a wide range, from the traditional 'Majorcan Dance' and 'Archibald McDonald of Kippoch' to the deep pagan roots of songs like the late Shekinah Mountainwater's invocation 'Lady Mother of All' and Les Barker's 'Earth'. 'Black Sarah' has a fierce bite as a Gypsy fortuneteller laments over centuries of betrayals and losses, while 'Amanda's Lullaby' is a moving tribute to the love a mother feels for her child. Barrett's dulcimer is accompanied by Irish fiddle, bohran and flute to create a beautiful collection of music. Absolutely heavenly!" Review by Leni Hester, she is a writer, witch and artist near Denver. She serves the Orisha and teaches in the Reclaiming tradition. "A combination of mystical images, passionate Celtic inspired music and songs of accountability... An unbroken thread of love of the earth, respect of her creatures and a peek into the window of possible mysteries of spirit bind this CD together. The style of singing is heartfelt and full of passion. Barrett is a gifted dulcimer player. ... Barrett's music will be a heartfelt guide for you as you explore your own spiritual connection with nature and things not easily defined." Reviewed by Jim Smith, Americana Gazette, June - July 2009.

Here's what you say about
Ruth Barrett - Garden of Mysteries.